A matter of life and death: why people are prepared to die (and kill) in the boxing ring 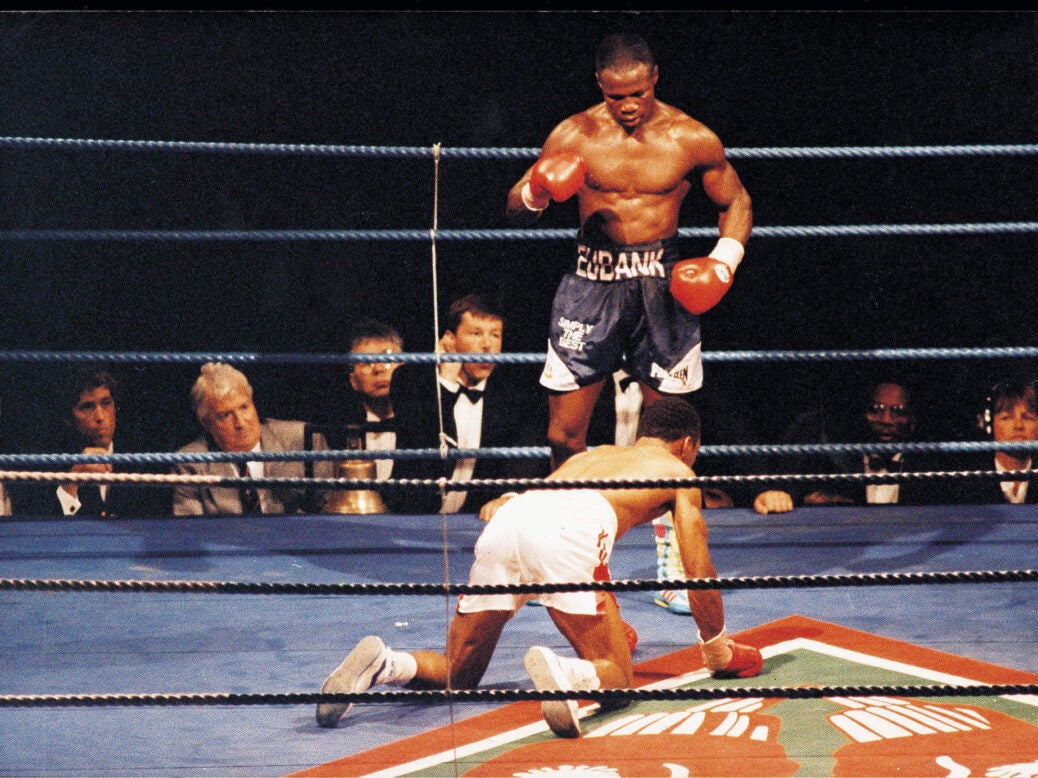 For those seeking vicarious thrills, boxing is a perennially disappointing, occasionally harrowing option. Leaving aside the commercial reasons – dodgy scorecards, promotional disputes keeping fighters apart – the longer one remains a committed witness, the less likely boxing is to deliver a happy ending.

The seemingly unbeatable young challenger coddled in hyperbole will be found out. This can happen against the unlikeliest opponent, through undertraining, moving up one weight division too far or being caught by boxing’s greatest danger: the punch you don’t see. The underdog come good will carry on to fight again, before they soon enough stop beating the odds and end up on their back. Or, most commonly, time – the only unconquerable adversary – will dull reflexes, calcify extremities and betray senses.

The sport supplies a distinct paucity of happy endings but no shortage of tragic ones. However poignant it is to see a once-great Joe Louis hanging over the canvas, knocked out by a young Rocky Marciano, there are other, darker nights, which lead to calls for the sport to be outlawed. Compared to its boom years in the early 20th century, boxing is now a niche interest relegated from the newspapers’ back pages, with the exception of rare “crossover events” such as last year’s overblown Floyd Mayweather v Conor McGregor “money fight” in Nevada.

The sport’s habit of destroying its competitors isn’t the only reason for this stagger towards the margins. But it hasn’t helped in countering perennial charges of barbarism, or securing the terrestrial television platforms that boxing once commanded.

Scarring occasions in which a fighter has lost their life are the impetus for Elliot Worsell’s Dog Rounds, a testament to the ways boxing implicates fighters and those who watch them in its darkest possibilities. The winningly honest Worsell frames the book as aversion therapy for the licensed brutality to which he has been addicted since his teenage years, thinking that by interviewing fighters whose hands caused the deaths of opponents, “I may well become conditioned to falling severely ill at the thought of ultraviolence”.

The irony is that during his writing, Worsell became involved in a high-profile reminder of boxing’s capacity to horrify. He was ringside in 2016 for the British title fight between Chris Eubank Jr and Nick Blackwell, the latter a fighter with whom former publicist Worsell had developed a close working friendship. Blackwell began the night as champion and ended it in an induced coma. Affectingly, Worsell opens the book by discussing the oddity of being in Eubank Jr’s dressing room afterwards, congratulating a man whose fists put his friend in hospital and looking to the fighter’s father, Chris Eubank Sr, for comfort.

The elder Eubank lived through his own version of this crisis, in a more visible, tabloid-endorsed era. When his uppercut at White Hart Lane in 1991 left Michael Watson with life-altering injuries, it did so on ITV in front of 12 million viewers. A lack of available emergency care and a bungled trip to a hospital without neurological facilities compounded Watson’s condition. He sued the British Boxing Board of Control and the medical requirements on subsequent fight nights were enhanced radically (an overhaul that saved Blackwell’s life).

For all this modern stringency and trauma planning, chaos remains an inextricable element of boxing. In part that’s the nature of a sport where one of the chief ways for a fighter to win is by incapacitating their opponent. In a broader sense it has to do with the pursuit of victory itself. Boxing is multi-tiered but at its root two-sided: the left and the right of the card, prospect and opponent. While mismatches – in which a gifted competitor faces a journeyman whose skill is expressed by losing gracefully – carry risks, the more dangerous scenario involves a fighter meeting their mirror-self, someone of equal ambition, skill and courage.

Those involved in ring deaths tend to display not only an absence of malice, but the wounded sense that the proficiency of their actions – because of the outcome – cannot be admired. This is what fighters are trained for: to dish out blows until the referee or their opponent’s corner intervenes. They cannot stop until they are stopped. In almost all cases it’s all they’re qualified to do and, in more than one case in Worsell’s book, something they’ve said they’re prepared to die for. A necessary delusion about one’s invulnerability – a self-image that is part superhero, part god – is required to operate in a profession in which you sign a death waiver each time you take part.

Dog Rounds highlights the impact of ring tragedies on their “perpetrators”, most of whom had no choice but to continue fighting after killing someone they held no ill will towards, having families to support and no other means of making a living. Ray “Boom Boom” Mancini, once an all-American poster boy, saw sponsors flee after his fatal fight with Kim Duk-koo in 1982, fearful that their brands would be tarred by associating with a man they could no longer categorise – athlete or murderer? Within a year of Kim’s death, both his mother and the fight’s referee committed suicide. Mancini lost his fire. Worsell quotes his explanation: “Napoleon said – and you didn’t know I could quote Napoleon, did you? – that after the age of 30 a man’s spirit is not made for war.”

Like all martial machines, boxing feeds on the young – those who haven’t yet been brutalised by its workings – and demands they internalise a code that says you must be prepared to fight to a conclusion, even a fatal one. The worst harm comes when the fighter, having steeled himself to abide by this code, has to enact it and carry on afterwards. Almost every fighter involved in a death has been drastically altered, unwilling to go all-out for a knockout for fear of repeating the fatal ending, vulnerable themselves to the blows of an unconstrained opponent. Worsell acknowledges his own guilt in the process that turned Blackwell into a machine of this kind, having believed him capable of withstanding any punishment and having willed his fight with Eubank to be brutal.

Other fighters talk about being treated like racehorses, and there is an uncomfortable, often racial power balance at the heart of the sport. Boxing is peopled largely by those drawn from poverty, for whom fighting is one of very few routes out of hardships so pervasive they have passed into cliché. In The Bittersweet Science, a collection of essays edited by Carlo Rotella and Michael Ezra, the most captivating company is Bernard Hopkins, profiled by Rotella. Hopkins, who competed from 1988 to 2016, fought at the highest level into his fifties and describes himself as “a slave who learned to read”. He turned around a life featuring prison and drug-dealing into a minority share in a major promotional company by virtue of his astonishing capacity to counteract opponents’ intentions; a gift that saw him win titles decades after his contemporaries retired.

A student of the art of boxing – a technically adept, defensive stylist – Hopkins’s late years gave the impression that resorting to violence was a form of vulgarity. For all his success, his desire not to fall into traps that made many former champions penniless and punch-drunk, Hopkins remains aware of the structural inequality of which boxing is a microcosm – “It’s still who can buy the slave with the most money… You think they love you, try to date [their] daughter.”

The narrative of boxing, like that of its leading practitioners, is one of decline. The sport, according to Michael Ezra’s essay on fighters who went on too long, is in a state of “post-prime”, getting by on memories of its glory days. This golden era is the subject of A Ringside Affair by James Lawton, a journalist who claims to have witnessed “the last great age of boxing”, which translates as the tail-end of Muhammad Ali’s career until Mike Tyson’s hurtle into ignominy. Even the apparent exceptions to boxing’s rules of deterioration aren’t, in the end, exceptions, as Lawton affirms. The sweep of his reports allows for familiar narrative arcs and the occasional arresting one-off. We see the lowering of the once untouchable Ali and the redemption of George Foreman, from brooding ogre to jolly grill salesman. We also witness the fallout that came from Roberto Durán’s decision to turn his back on a taunting Sugar Ray Leonard in 1980, throwing up his gloves with the words no más (“no more”). Durán’s refusal wasn’t, Lawton assures us, from cowardice but the wounded pride of a ferocious street-fighter being toyed with by the graceful Leonard: “A man like Durán can take anything… apart from having his manhood… mocked and scorned in the eyes of the world.”

Lawton’s most piquant decline narrative is the case of Mike Tyson, first seen as a lisping 20-year-old delivering a motivational speech to high school students. He is vividly drawn – only the late Jonathan Rendall caught him as sensitively – and even at his fearsome peak cuts a forlorn figure, “destined always to be alone”. Tyson once intimidated opponents so much that amateur foes quit before they fought him. On the eve of his last meaningful fight, though (against Lennox Lewis in 2002), it’s not a question of who will win but, as Lawton puts it, “How would Mike Tyson take his beating?” Tyson declared bankruptcy in 2003 and retired three years later.

Worsell thought Blackwell’s eventual recovery represented a happy ending, but Dog Rounds closes with the fighter in worse shape than ever, having returned to sparring with inevitably damaging consequences. Bernard Hopkins was drawn back for one last fight, his lifelong quest not to be “undignified” ending with him punched through the ropes.

Worsell and Lawton frame the appeal of boxing in terms of an illicit habit: an addiction or affair. Boxing isn’t only, or even mostly, founded on its stars and their tragic declines, however. The nearest we get to an explanation of what makes it so compelling comes away from the Vegas Strip and TV lights. One answer comes in an essay by Donovan Craig, a part-timer “good enough to get hurt”, who calls the ring “the only honest place” as it is able to strip one to the “basic self”. Another comes in Mexico, where Worsell, watching a lucha libre wrestling show and bored by the pantomime of carnage, wants to see “a solid, hurtful, real punch. I wanted it all to mean something.”

Even in its most corrupt state, boxing remains a place for the authentic, where struggle must be endured without short cut and hope summoned long after it’s likely to visit. Despite the price it extracts and the guilt it causes, the glimpse of something people are prepared to die for – the essential victory a fight represents, rather than the pageantry it comes dressed in – is still a tantalising sight to many of us.