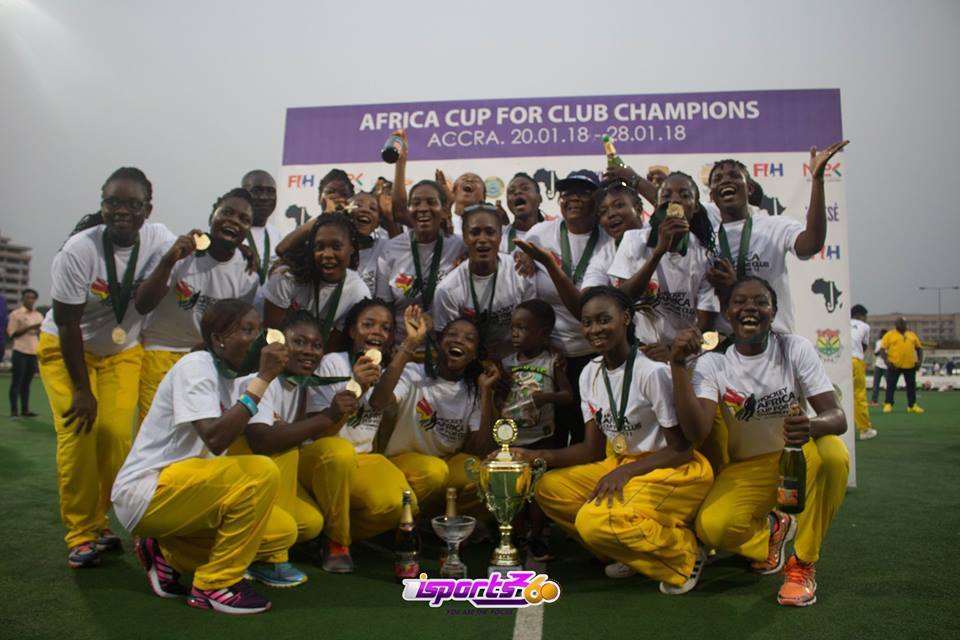 The Theodosia Okoh hockey stadium in Accra was filled with joy and wild celebrations as Ghana’s GRA ladies emerged winners in the women’s category beating Telkom to give Ghana her first ever gold in the competition.

The 20th edition of the Africa Cup for Club Champions (ACCC) Women’s category came to an end on Saturday January 28, 2018 with exciting and heartbreaking moments.

The duel was a repeat of the 2017 final. The sides had also met earlier in the round robin stage with Telkom beating GRA by a lone goal. The final started with a much packed stadium and GRA dictating pace from the blast. With revenge on their minds, the ladies from GRA mounted huge pressure on Telkom but the defense and goalkeeper stood tall.

The first two quarters saw GRA play great hockey but their front line failed to convert chances that came their way. Telkom on the other hand had their own share of the cake from penalty corners, but failed to make it count.

The final quarter gave spectators what they desire with excitements, misses, suspensions and chances. In the 56th minute, goalkeeper Cynthia Onyango paried a hit from a GRA player into the path of Roberta Sarfoa who made no mistake to slot it home. The goal brought the entire stadium into rapturous mood as Ghana was on her way for a first ever gold medal in ACCC. The final whistle came and GRA ladies emerged champions ending the dominance of Telkom Kenya.

Speaking to isports360 after the match, skipper of GRA Monica Grant expressed her joy in the victory. “We are so happy for this victory. We really prepared for this tournament and wanted to revenge on Telkom…thanks to all who came in to support us. We will defend this trophy come next year” she said.

Ghana Police ladies also came third beating Kada Queens on penalties after the game ended 1-1. Strathmore did the double over Yobe Desert beating them 3-1 in the 5th and 6th place match.