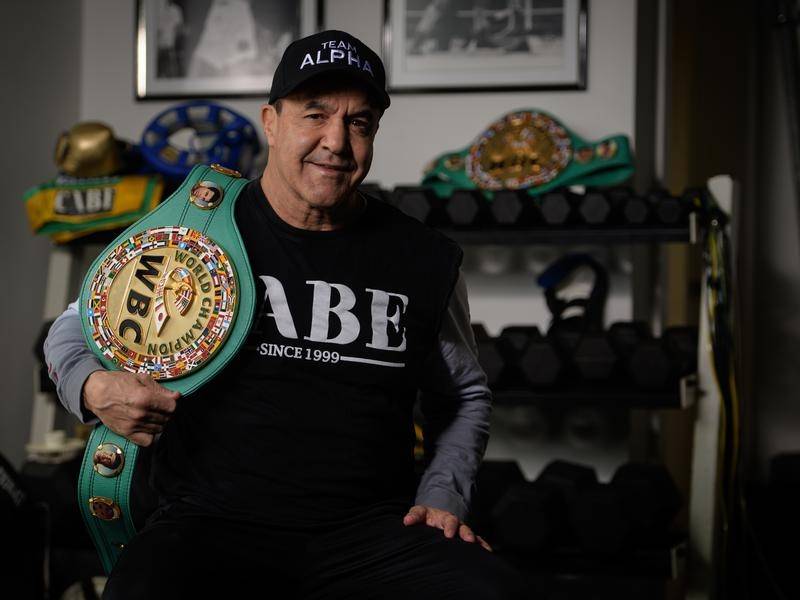 Almost 40 years after he started boxing, Jeff Fenech is as feisty outside the ring as he was inside it as he overcame brittle hands to become one of Australia’s greatest sporting heroes.

At the peak of his success in the late 1980s with three world titles won, Fenech was arguably the best-known sporting identity in the country with his catch phrase “l love youse all” in popular use.

Since his career finished Fenech hasn’t felt that love reciprocated or the scope of his achievements fully appreciated.

“If I was in America or I was in Russia or anywhere else, everybody would know about them,”‘ Fenech told AAP.

“But because I’m in Australia and we live in that lucky country, that people say it is, they only like you when you’re on the way up and then they try to chop you down.”

Fenech’s pugilistic prowess has been recognised around the world.

In a World Boxing Council poll, Fenech was ranked one of their two greatest featherweights and his picture, along with that of late Mexican great Salvador Sanchez, adorns the WBC belt given to each new champion in that division.

But such accolades and awards fail to capture and convey the crowd-pleasing way Fenech fought.

A relentless pressure fighter, Fenech wore down his opponents, conquering every man he fought from bantamweight to featherweight.

He won his first world title in just his seventh professional contest, in little more than six months in the paid ranks, after being deprived of an Olympic medal by an overturned quarter-final result.

Between April 1985 and March 1988, he won the IBF bantamweight, WBC super bantamweight and featherweight belts, emerging victorious from all 11 of his title fights in those classes and only twice being taken the distance.

For 30 years, Fenech held the record for fewest fights (20) to win world titles in three different divisions and he ended each of those championship bouts inside the distance, remaining unbeaten in getting there.

He took brief breaks away from boxing to rest his hands and play some lower grade rugby league games for Parramatta.

A controversial draw in his first super featherweight fight with Azumah Nelson deprived him of what many felt was a deserved victory and an even rarer fourth world title in separate divisions.

Nelson looked ready to fall in the 12th and final round.

“I just know if my first fight against Nelson was 15 rounds, I would have knocked him out in the next round; he was (almost) knocked out in the 12th round, I held him up,” Fenech said.

“I done it with broken hands.

“The reason why I couldn’t knock him out was my hands were hurting me more to punch him, but I still punched him.

“The pain I was in it was terrible.”

It was an all-too-familiar story for Fenech throughout his 33-fight professional career.

“It’s something I lived with. I’d go back home and I’d be in pain all night,” he said.

“Most times I’d go to hospital and get injections.”

The draw against Nelson was followed by an eighth-round stoppage loss in their rematch at Melbourne’s Princes Park in 1992.

Fenech had one last crack at a world title but suffered a second-round stoppage loss to South Africa’s then IBF lightweight champion Phillip Holiday in 1996.

That looked certain to be his last flight but 12 years later he returned at the age of 44, to earn a majority points decision over a 49-year-old Nelson in their third scrap.

No one can question the quantity of high-quality competition Fenech faced.

He opposed 10 fighters who won world titles either before or after he fought them, beating eight of them.

He was the first member of the outstanding 1984 Olympic boxing class to win a professional world title, ahead of other future greats Pernell Whitaker and Evander Holyfield.

His involvement in boxing outside the ring has extended to training a multitude of well-performed fighters at different stages of their careers.

He mentored Vic Darchinyan to a flyweight world title and among the many others he was associated with were Mike Tyson, Danny Green, Hussein Hussein, Nedal Hussein and Sakio Bika.

Now his boxing career has gone full circle as he trains world-ranked super bantamweight Brock Jarvis, the nephew of former rugby league star Pat Jarvis, who in his other job as a police officer, directed Fenech away from street fighting as a youth to a local club where he learnt to box under trainer Johnny Lewis.

“It’s an amazing story, how I started boxing and how it has ended up is crazy,” Fenech said.

He considers the postponed domestic super-fight between Jeff Horn and Tim Tszyu an interesting contest.

“He’s got this amazing strength and will to win but the one thing I think Tim has over Jeff is he has real great ring smarts.”

The biggest fight of Fenech’s life occurred outside the ring last October, when he fell ill in Thailand and required heart surgery.

He was on a drip for the best part of two months but he said he was now in good health.

In a life full of drama, it was the latest fightback from adversity.

Fenech’s a passionate person who has sometimes fallen out with boxing friends but few have lifted this rollercoaster sport in Australia to such highs.