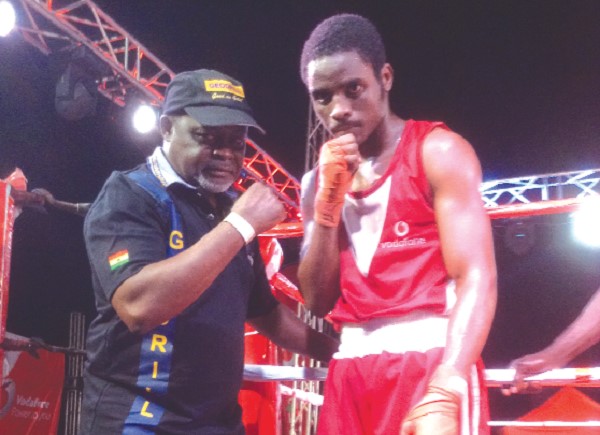 It is call time at the Fit Square Gym here in Ghana’s capital, Accra. Amateur and professional boxers pace up and down the space’s confines, getting ready for the evening’s schedule.

Dalvin proudly displays the many traits that made his father, Azumah Nelson, a global boxing phenomenon and a legend of many yards. Azumah Nelson’s legacy transcends the shores of Ghana. Years after hanging his gloves, he continues to dominate conversations around boxing in the country and beyond.

And, rightly so, as the legacy has not died down and in the past few years, moved even closer home thanks to Dalvin.

Cast in the mould of greatness, Dalvin is building on the excellent sportsmanship that stunned the world of boxing for years.

He is his father’s blood through and through, exhibiting it with ease, and anchoring an admirable skill that excites.

Pugilistic to the core, he rides away from all the enviable feat his father recorded, and is seeking to build his own charm and trademark. The love for boxing was harnessed at a very young age, and has since been an obsession.

“It is one of the first things i started learning with my dad. Also, in JHS, we went for a competition in Australia, and they came to my corner telling me to take it easy on my opponent. From there, I knew this was what I wanted to do and decided to give it a shot.”

Dalvin owes his mentality and focus to his father and the values that underpin the sport of boxing.

Often, he gets official comparison with his dad; he is fully aware that won’t go away but also knows he has to work hard to create a name of his own.

“It will come with working hard and following my own footsteps, and be the best version of myself.

“Hard work is what keeps me going. There is no food for the lazy man.”

Dalvin is yet to find the kind of boxer he is but says he is a full bouquet.

“I am a bit of everything.”

Constantly, he feeds off a reminder to be greater than his father. This has come with a special skill tool kit that has everything from precise brawls to body shots that dissipate even the toughest opponent.

The traits, he says, are similar but of different shade.

“I can brawl, and I can box. I am a student of the game, always willing to learn something new.

“I have got a good right hand. When it lands well, you will feel it. I am good with body shots, too. When it touches you, you will cringe.”

Dalvin’s caretaker coach at the gym, Daniel Lartekwei Lartey, says the very makeup of the 23-year-old makes it not too hard to predict he is headed for greatness.

“He has something in him and I know he can prove it. The talent and spirit is there. When you look at him now, the speed and height is so good.”

There have been moments where Dalvin felt like giving up but for an amateur who is even yet to turn fully professional, he has learnt the rudiments to know that passion is the most important shield in any sport.

“The pressure and anxiety keeps me going. I have to do because I believe I can do it. It is an extra motivation.”

Solid as a rock. Dalvin wields the crown that was once heavy to emulate but now giving way to the determination and pursuit of a young man not content with just a few jabs.

On the wings of an eagle, he knows that one day, when his glory comes, it will be his.