FEATURE: Did referee Erasmus Owoo get his call right? 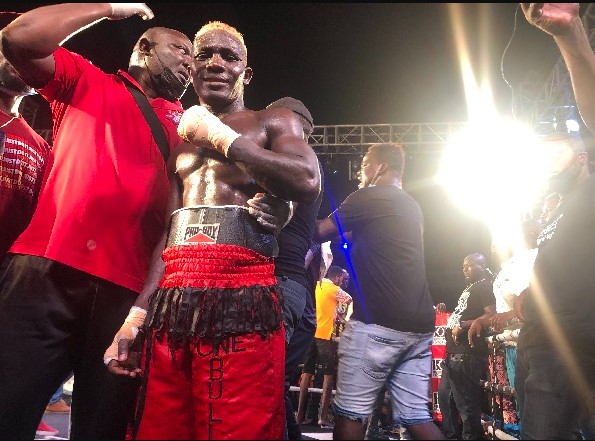 I was at the ringside when the stoppage came. It ended up to be a surprise call by referee Erasmus Owoo to me because I felt he ended the fight too early.

Michael ‘One Bullet’ Ansah had dropped Sheriff ‘One Time’ Quaye with a ferocious left hook in round five but just when the latter wobbled, referee Owoo ended the bout in favour of the former.

The referee’s decision nearly created chaos at the Bukom Boxing Arena after supporters of Quaye felt the decision to stop the fight was bad.

Calm was restored in the ring but Quaye’s camp looked unhappy by the decision. In my honest opinion from the ringside where I was seated, it was obvious Quaye was dazed but I expected the referee to allow him to continue with the fight.

I might be wrong in my assertion but I have always been an advocate of referees stopping fights when they feel a boxer’s life is in danger in the ring.

The rules of boxing state that a referee decides when to start or stop a count when a boxer is down. He also has the power to determine when a fighter’s health will be endangered by more blows and thus stop the fight.

Going by these two functions of the referee in the ring, it will be difficult to blame referee Owoo for stopping the fight because he indeed counted for Quaye when he went down.

Referee Erasmus Owoo also said he felt  Quaye didn’t prove to him that he was in good shape to continue the fight when he stood up from the canvas.

“I felt his life was in danger because he was wobbling even when I asked him to come forward,” Referee Owoo told Graphic Sports after the fight.”

He added: “He was supposed to raise his hands and walk on steady legs but that didn’t happen so I decided to end the bout to avoid any danger.”

In 2017, renowned Ghanaian referee Roger Barnor was blamed by compatriot Obodai Sai when he stopped his bout with then undefeated Namibian middleweight fighter, Walter Kautondonkwa in five rounds in a similar manner.

That forced referee Barnor to explain his decision in which he said he ended the fight to protect Sai after he was caught by a right hook in the fifth round.

There is another school of thought which believes that fighters come back from knockdowns to win fights and Quaye could have done same against Ansah.

One of such great wins was Diego Corrales’ tenth round stoppage win over Mexico’s Jose Luis Castillo in May 2005 when he came back from two knockdowns to stop his opponent.

Such performances bring out the best in boxing but in that bout, I think referee Tony Weeks was charitable in allowing Corrales to continue the fight when he could have just stopped the fight.

Referee Weeks was praised worldwide for allowing the fight to continue but not all ring officials can take that chance, and Owoo is one of them.
His colleagues Barnor and May Mensah Akakpo defended his decision to end the bout to avoid any danger.

Referee Akapko said: “It was the best of decision to take because he fell on the back of his neck and that could be dangerous. I would have done same if I were in the ring as the referee and I think the decision saved the boxer from further punishment.”

Barnor thought same and said the basic rule of boxing was to ensure the boxer lived to fight another day. He congratulated his colleague on having the courage to take such a decision.

“He did the best thing to save the boxer and that is his job in the ring,” referee Barnor stated.