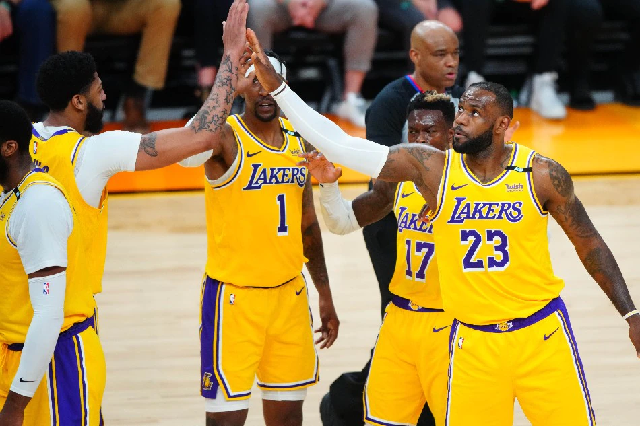 The Lakers needed a win against the Suns, and on Tuesday, this team played with the requisite effort to deliver it. The first round is all tied up.

The We Believe Lakers are alive. After a dispiriting Game 1 loss in which they didn’t put forth the necessary energy, focus or execution to beat the Phoenix Suns, the purple and gold flipped the script in Game 2, a 109-102 victory. And in doing so, these Lakers showed that their promises made will be promises kept.

The team said they needed to bring more effort in this one, and they put their money where their mouth was, flying all over the floor on defense and looking like the havoc-generation engine that is their calling card when they’re at their best.

Anthony Davis said he had to be better, and he delivered with a 33-point, 10-rebound, 7-assist and 3-block performance while displaying a noticeable level of extra aggression as he jawed with Jae Crowder and Suns fans throughout the second half.

The positive trends continued for the whole team. LeBron James (23 points, 9 assists) picked the Suns apart mentally, and got more aggressive going to the basket physically to really spark the team, especially with his two dunks in the first half. Frank Vogel ignored resounding calls to change up his starting lineup and stuck with Andre Drummond (15 points, 12 rebounds), who rewarded him with a dominant effort inside, creating extra possessions for the Lakers with his rebounding while having maybe the best defensive game of his brief career in purple and gold.

Vogel did change up his second unit, however, bringing in Marc Gasol instead of Montrezl Harrell to give Los Angeles’ second units a dose of extra composure and spacing for James to go to work in. Dennis Schröder kept the offense afloat while James sat with 14 second-quarter points, finishing with 24 total.