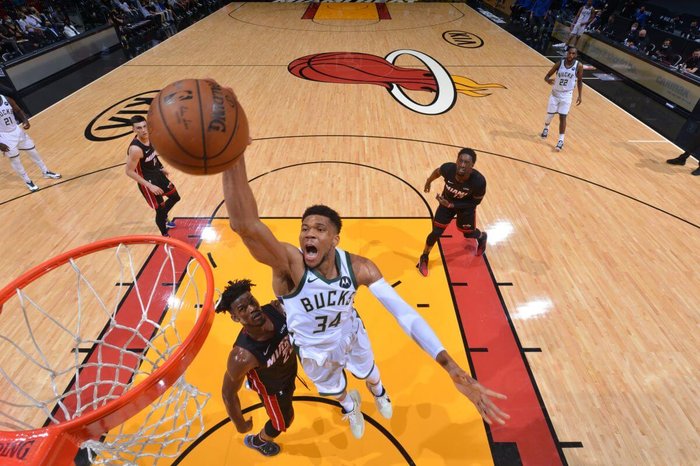 Giannis Antetokounmpo scored his first career play-off triple-double to help the Milwaukee Bucks to a 120-103 victory over the Miami Heat.

The win sealed a 4-0 series clean sweep against the Heat, who lost to the LA Lakers in last year’s NBA finals.

The Bucks will now face either the Boston Celtics or the Brooklyn Nets in the Eastern Conference semi-finals.

“I’m blessed I can do a lot of things to contribute to our team,” said Antetokounmpo.

“Whoever we get in the next round, we’re going to be ready.”

Antetokounmpo starred with 20 points, 12 rebounds and 15 assists, while Brook Lopez, Bryn Forbes and Khris Middleton all scored 20 point or more.

The Heat, battling to stay in the play-offs, took a first-quarter 26-22 lead at their AmericanAirlines Arena and were in front by seven points at half-time.

But a 13-point turnaround in the third period put the Bucks in control and they powered on to make it a comfortable win despite a triple-double from the Heat’s Jimmy Butler.

In the Western Conference, the Portland Trail Blazers made the most of their home court advantage to beat the Denver Nuggets 115-95 and level their series 2-2.

Norman Powell top scored for the Blazers with 29 points.