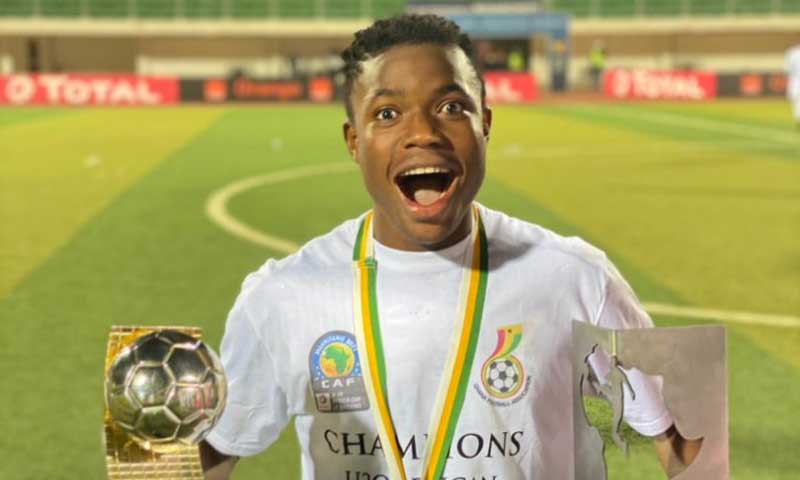 Reports in Africa claim Liverpool have agreed a £1.5million deal to sign Fatawu Issahaku. The Reds have been closely linked with the 17-year-old this week but it now appears they may have won the race for his signature.

Issahaku has not been short of options after he was named the Player of the Tournament at the U20 Africa Cup of Nations with Ghana.

The teenager also had two goals nominated for Goal of the Tournament after stepping up from the U17 side that he captained at the Cup of Nations in January.

It’s understood that Issahaku travelled to Germany to sign with Bayer Leverkusen but the deal then collapsed at the eleventh hour.

Now Liverpool have moved quickly to get a deal over the line.

He claims Liverpool will pay Ghanian side Steadfast FC a fee believed to be around £1.5million.

Issahaku has penned a five-year deal at Anfield and will become the club’s second summer signing after Ibrahima Konate.

It’s said the youngster will be loaned out though next season due to work permit issues as he looks to get some regular playing time in Europe.

Last week, Issahaku confirmed on his Twitter channel that he’s signed a sponsorship deal with Nike.

Borussia Dortmund and Basel were also interested in signing the player.

Udinese, Nordsjaelland and Red Bull Salzburg have also been linked but their interest was not deemed as serious as the other clubs.

Issahaku was called up to the Ghana senior side for Cup of Nations qualifiers with South Africa and Sao Tome and Principe back in March.

He is now hoping to make his full debut next month after being named in the 30-man squad to face Morocco and Ivory Coast.

Steadfast president Haruna Iddrisu made it clear in an interview with Joy Sports that the club will seek to receive the best offer for their most-prized asset.

Issahaku is widely regarded as one of the biggest talents in African football. Now he looks set to earn his big move.