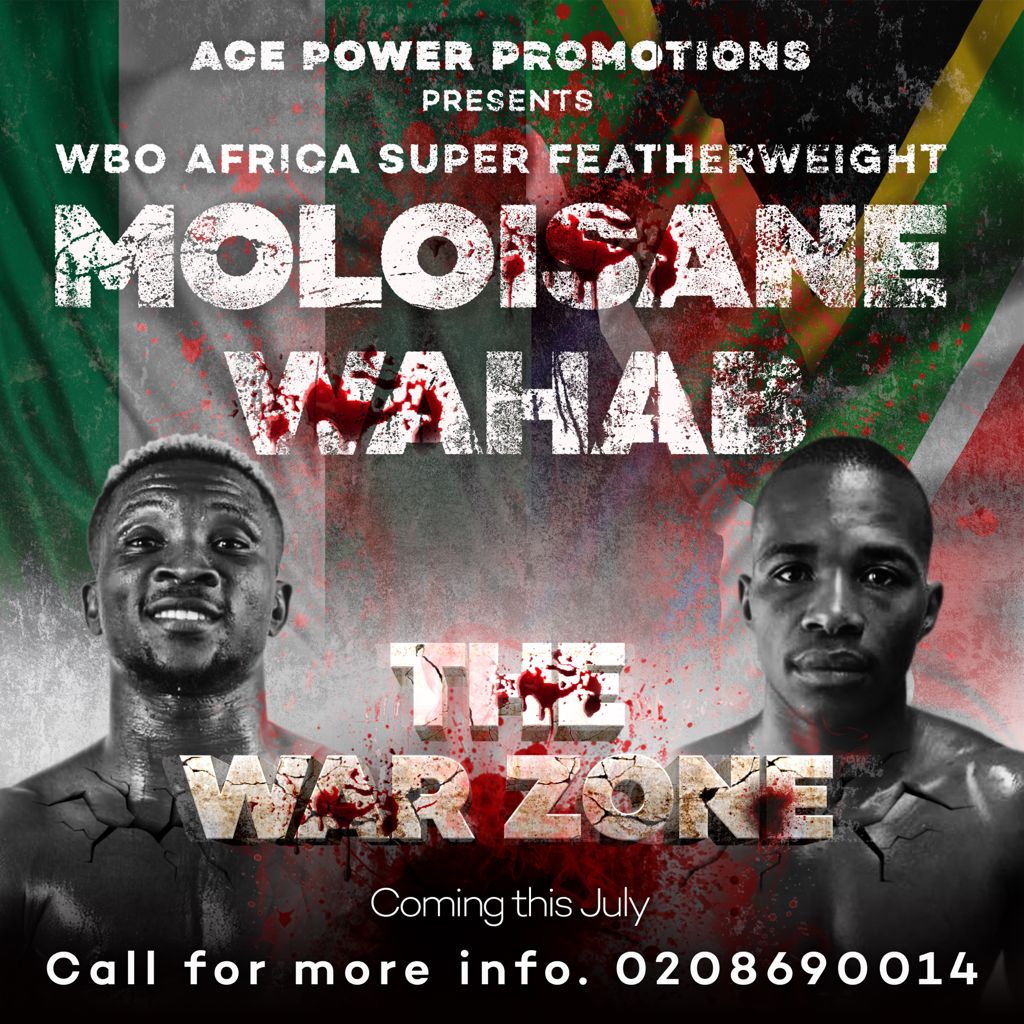 Set to be formally announced at a press conference in Accra this upcoming Monday, 14 June, an action packed fight night is promised on July 10 when refreshing boxing syndicate, ACE Power Promotions in collaboration with Streetwise Promotions and DiBella Entertainment stage the ‘War Zone’ fistic show headlined by the WBO junior lightweight title fight between unbeaten Ghana based Nigerian, Joshua Oluwaseun Wahab (20-0, 13 KOs) and Anthony ‘Homeboy’ Moloisane of South Africa (14-5-1, 8 KOs) at the Bukom Boxing Arena in the Ghanaian capital.

“As usual, ACE Power always come up with surprises and new spectacles to present good fights interlaced with great entertainment and presentation and this fight night will not be different. We are working with two of the most experienced boxing promotion outfits so we can only tell fight fans to rush for their tickets to come and see real action for themselves on 10th July,” said Isaac Amankwah, General Manager of Accra based ACE Power Promotions.

“The partnership with Streetwise and DiBella is just the beginning of the big things we promise to punch into Ghana boxing, all in the drive to develop good fighters, good fights and great champions. At the same time we seek to develop the sport commercially and expect to regularly stream our fights to a worldwide audience beginning with our press conference on Monday,” Mr. Amankwah added.

23 year old Wahab, a former WBA Pan-Africa and WBF Intercontinental super featherweight champion is managed by Streetwise Promotions whose other boxer, the lanky Ahmed Abdula (2-0, 1 KO) takes on compatriot David Okine in just the third fight of his burgeoning pro career after successes on debut in December and again on March 27.

Meanwhile, experienced campaigner, Dodzi Kemeh (24-2, 22 KOs) returns for his fight since winning the IBF Continental Africa super welterweight title in October 2019 when he competes in an 8-round super welterweight contest against dangerous opponent, Naimou Aziz Samson.

Another fight expected to thrill is of course the super lightweight contest scheduled for ten rounds featuring former WBO junior welterweight champ, Robert ‘Stopper’ Quaye against countryman, Richard Amenfu. This is projected to be a warm-up for a tilt at the IBF Continental Africa title in September for undefeated Quaye (19-0, 16 KOs) and his vast army of supporters are expected to throng the Bukom Boxing Arena to power him on versus Amenfu.

Other undercards include the super welterweight contest scheduled for 8 rounds between Abraham Afful and a yet to be confirmed opponent, another super welterweight contest, also scheduled for 8 featuring ACE Power stable debutant Emmanuel Baidoo against Moses Lartey as well as Samuel Martei Laryea versus Billy Quaye at super bantamweight, billed for 8 rounds.

“We are very excited because for the first time we are going to welcome fans to our show, we have lots of giveaways for those who buy their tickets early. We will announce the details to the press on Monday but we ca assure fight fans July 10 at the Bukom Boxing Arena will be lit,” ACE Power Promotions GM, Isaac Amankwah stated.