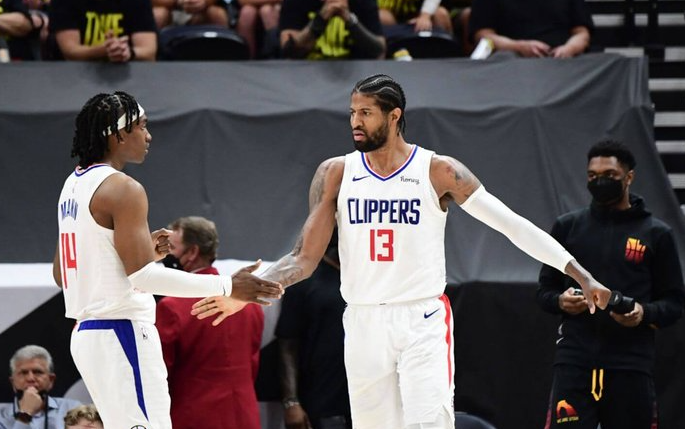 With All-Star Kawhi Leonard sidelined, the Los Angeles Clippers went on the road and withstood a barrage of first-half 3-pointers to beat the Utah Jazz 119-111 in Game 5 of the Western Conference semifinals on Wednesday.

Paul George had 37 points, 16 rebounds and five assists, Reggie Jackson and Marcus Morris Sr. combined for 46 points and the Clippers’ offense shot 51.2 percent from the field without Leonard, who was ruled out indefinitely Wednesday with a right knee sprain. The Clippers lead the series 3-2 and have won three consecutive games after falling behind 0-2.

“This is the biggest game of our season, especially being down our best player,” George said.

“We wish Kawhi the best and a speedy recovery, but we knew coming into this we’d have to play together, we’d have to step up.”

The Jazz hit 17 of 30 3-point attempts in the first half, but only led 65-60 at halftime. Utah went 3 of 24 from 3 in the second half, including misses on all 10 of its attempts in the third quarter. Bojan Bogdanovic led the Jazz with 32 points.

“I thought a lot of their threes were tough ones,” George said. “We didn’t overreact. They came out hot. Good thing about it was we were able to weather the storm.

“We came back down and we were able to attack them on offense as well. We just took their blows, took their punches. We just thought they couldn’t sustain that over a full 48 minutes.”

The Jazz were again playing without starting point guard Mike Conley, who hasn’t played in the series due to a hamstring injury.

Game 6 is Friday in Los Angeles.