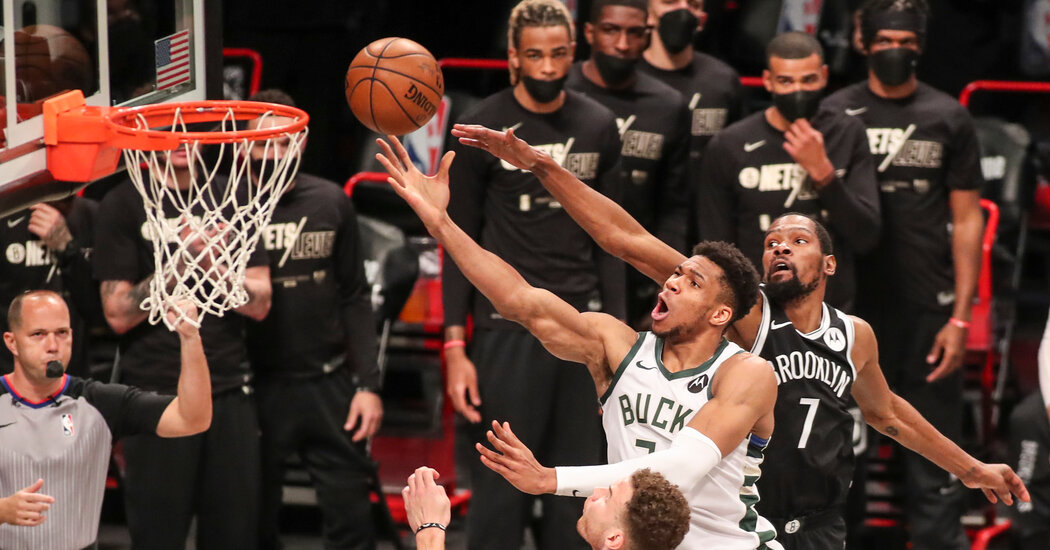 The Milwaukee Bucks are headed to the N.B.A.’s Eastern Conference finals after defeating the Nets, 115-111, in overtime on Saturday night in a decisive Game 7 for their semifinal series.

It was a disappointing end to the series for the No. 2-seeded Nets, who entered the playoffs primed to make a championship run, with their stars at last seemingly healthy at the same time. Their best three players — James Harden, Kyrie Irving and Kevin Durant — played only eight games together during the regular season because of injuries and other absences.

The Nets started the series favored against the third-seeded Bucks, but once again, injuries to the stars piled up, increasing the potential of an upset.

In Game 1, James Harden left after less than a minute because of a right hamstring strain. Nonetheless, the Nets won the first two games of the series at home in convincing fashion.

Then the Bucks squeezed out a win at home in Game 3. And in Game 4, the Nets lost Irving to a sprained ankle in the first half. The Nets also lost the game and appeared to be losing momentum with the best-of-seven series suddenly tied at two.

But in Game 5, Durant put together one of the greatest playoff performances ever, finishing with 49 points, 17 rebounds and 10 assists and becoming the first player to record those numbers in a playoff game. Harden surprisingly returned for that game, but was largely ineffective. The Bucks led by as many as 17 points, only for Durant to snuff out their lead almost single-handedly in the second half. Jeff Green emerged to fill some of the gap left by Irving, scoring a playoff-career-high 27 points, the most points off the bench by a Net in postseason

The Bucks struck back with strong performances from their stars in Game 6, with Giannis Antetokounmpo, Khris Middleton and Jrue Holiday scoring 89 of the Bucks’ 104 points.

Throughout the series, the Nets tried to take advantage of Antetokounmpo’s ineffectiveness as a shooter, a weakness that has vexed him throughout several playoff runs. Defenders routinely left him open on the perimeter or sent him to the free-throw line, where he also struggled. That made Antetokounmpo, a two-time Most Valuable Player Award winner, less of a threat late in games.

But Antetokounmpo still managed to have one of the best series of his career. Through the first six games, he averaged 30.5 points and 12.8 rebounds per game on 56.5 percent shooting. It was good enough to get the Bucks to a Game 7, and to the Eastern Conference finals for the second time in Antetokounmpo’s career.

The Nets had difficulty getting production from their role players, many of whom had career years. Joe Harris, one of the best shooters in the N.B.A., struggled all series — shooting just 35.5 percent from the field and only 32.5 percent from 3 through the first six games.

The Bucks’ series win brings them one step closer to winning their first championship since 1971, when the team was led by Kareem Abdul-Jabbar. In the Eastern Conference finals, they’ll will face the winner of the other semifinal matchup, between the Atlanta Hawks and the Philadelphia 76ers. That matchup is headed to a Game 7 on Sunday, after the Sixers tied the series behind a strong performance from Seth Curry on Friday. The Eastern Conference finals are set to begin on Wednesday.

The Nets missed a chance to make their first conference finals since 2002 and 2003, when they were in New Jersey led by Jason Kidd. Both of those years, the Nets went to the finals. They haven’t won a championship since the A.B.A. merged with the N.B.A. in 1976.