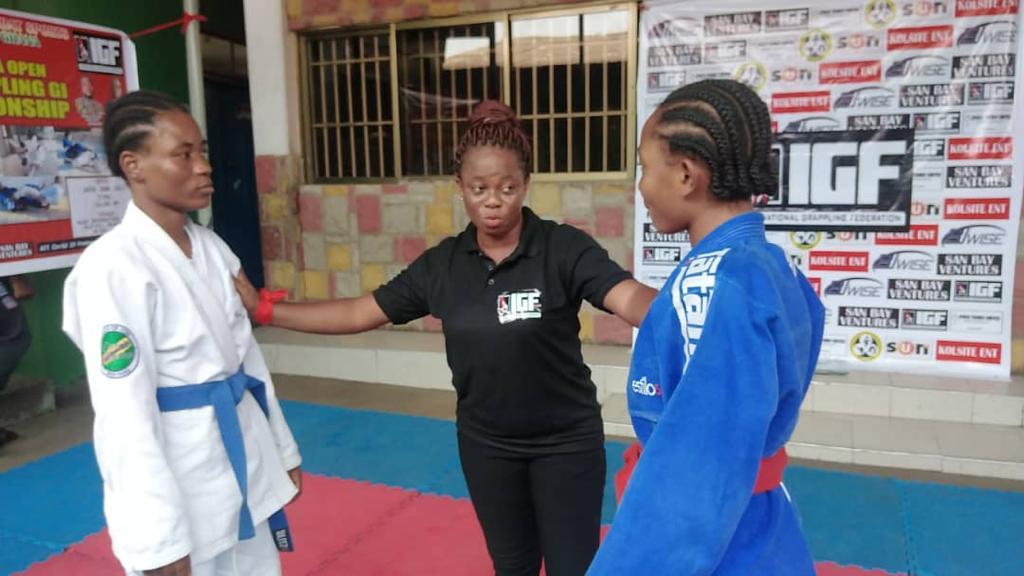 Chiefs of the newest rising sport in this country, Grappling are merrily singing what they believe are songs of hope for a bright future for the combat sport after hailing the resounding success of the first ever Ghana Open championship which locked up last Saturday at the Alko International School in Accra.

The one-day competition organized by the Professional Combat Sports Association of Ghana (PROCSAG) under International Grappling Federation (IGF) rules, saw a record number of participants cut across the regions of Ghana as the development and promotion of the fistic sport, especially in school gathers pace.

At the end, the winners in varying categories, both male and female, competed strenuously for the medals as well as places in the team selected to start camping to represent Ghana in international competitions within months hence, much to the delight of Evans Bernie-Johnson, Executive Director of PROCSAG.

“The level of competition showcased by all the grapplers today was beyond our imagination and it shows how fast they are learning and improving. Every single fight here today was close and could have gone either way, the winners had to work really hard to get their medals. This competition makes us very happy because it means we are ready to take on the world,” said Mr. Bernie-Johnson.

In the highly competitive events, both male and female, most of them students, vied for glory in varying weight categories.

Jonathan Abbey overcame stiff opposition from Ishmael Lamptey to emerge winner of men’s lightweight division and with it the gold medal, Lamptey took the silver of course whilst his namesake, Andrews Lamptey finished third.

In other duels, Shadrack Lawson showed just why he has been tipped for greatness by easily defeating Samuel Amon to win the under 17 boys category, with Hafis Amedor taking home the bronze medal for earning third place.

The under 13 boys division had the most participants as the drive to catch them young showed full yields and the organisers had no choice than to hand medals out to four young grapplers which saw 12 year old Hope of Glory Montessori School of Mamprobi in Accra pupil, Zoe Amoonu Bernie-Johnson beating out the field to win gold.

He defeated Gregory Edem Kojo who took silver, third place was jointly annexed by Aaron Bentum Bernie-Johnson, 10, also a pupil of Hope of Glory Montessori School and Nathaniel Osei Bobie after both couldn’t be separated.

Meanwhile, the ladies were not left out of the action as Business Management student at Ghana Communications Technology University, Hawawu Bashiru won gold after brushing aside the intense battle put up by fierce rival, Gertrude Kumi, 21 year old fashion designer in a reverse of places on the podium having swapped positions at the grappling exhibition tournament organized in Abelemkpe, also in Accra in April.

According to the organisers, all medal winners in the various categories will soon begin camping ahead of the grappling global championships in Lithuania in a few months and are still calling for all the help they can get to achieve success.

“We are still appealing for government, corporate and individual support in every way possible, financially or provision of equipment and technical service. The time to join in our impending success is now because I can assure Ghanaians that our grapplers will soon start bringing in medals as no sport can in this country,” said Mr. Bernie-Johnson.