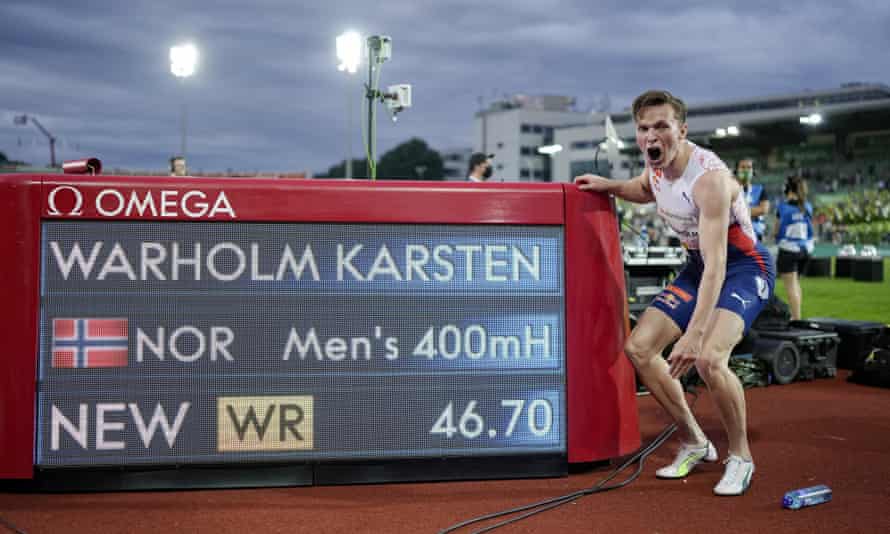 Karsten Warholm of Norway is the new world record-holder in the men’s 400m hurdles, toppling from track and field’s all-time bests pedestal a performance run by American Kevin Young at the 1992 Barcelona Olympics that stood nearly three decades.

In front of a home crowd Thursday at the 2021 Bislett Games Diamond League meet in Oslo, the two-time reigning world champion had a blistering start and crossed the finish in 46.70, eight-hundredths of a second under Young’s long-standing mark of 46.78.

“This was just a perfect moment,” Warholm said after the race. “Everybody’s talking about this world record that had been standing for many, many years – it’s older than me, actually.

“First time, Bislett [Games], back with audience, family and friends in the stadium, I knew I had it in me but of course it’s very special to be able to do it, and I’m just really happy and really proud. It’s an amazing moment.

“I knew that I have had fast times in my body for a long time, but it’s one thing to know that you’re in good shape, it’s another thing to be able to go out and perform.”

The 25-year-old’s record feat arrives less than a week after American Rai Benjamin came five-hundredths of a second short of Young’s time at the U.S. Olympic trials in Eugene, Oregon, clocking 46.83 to leap Warholm for second-fastest in history.

Warholm’s result further energizes what was already expected to be a showdown of the ages at this summer’s Tokyo Games. He, Benjamin – now third-fastest – and Qatar’s Abderrahman Samba, the fourth-best ever, all will be there to compete.

The former decathlete has now run seven of the top 15 times ever run in the men’s 400m hurdles – three at sub-70 – and reestablishes himself as the favorite heading into the Olympics.

Young’s record was among the oldest on the books in men’s track and field – the oldest for individual Olympic program events on the track.

The two-time Olympian ran his now former world-record time in the final of those 1992 Games, besting Edwin Moses‘ nine-year-old mark (47.02) from 1983 by nearly a quarter-second to capture gold and set the still-standing Olympic record.

Barcelona would be his last Olympics. After winning the world title a year later in Stuttgart, Germany, Young changed coaches, dealt with injuries and didn’t make it past the semifinals at the 1996 U.S. trials.

The Los Angeles native was a walk-on at UCLA. According to a 1986 LA Times piece, his only high school credential was a third-place finish at states and was helped only by a $1,000 Coca-Cola scholarship for “aspiring, future Olympians.”

Young was inducted into the National Track and Field Hall of Fame in 2006.