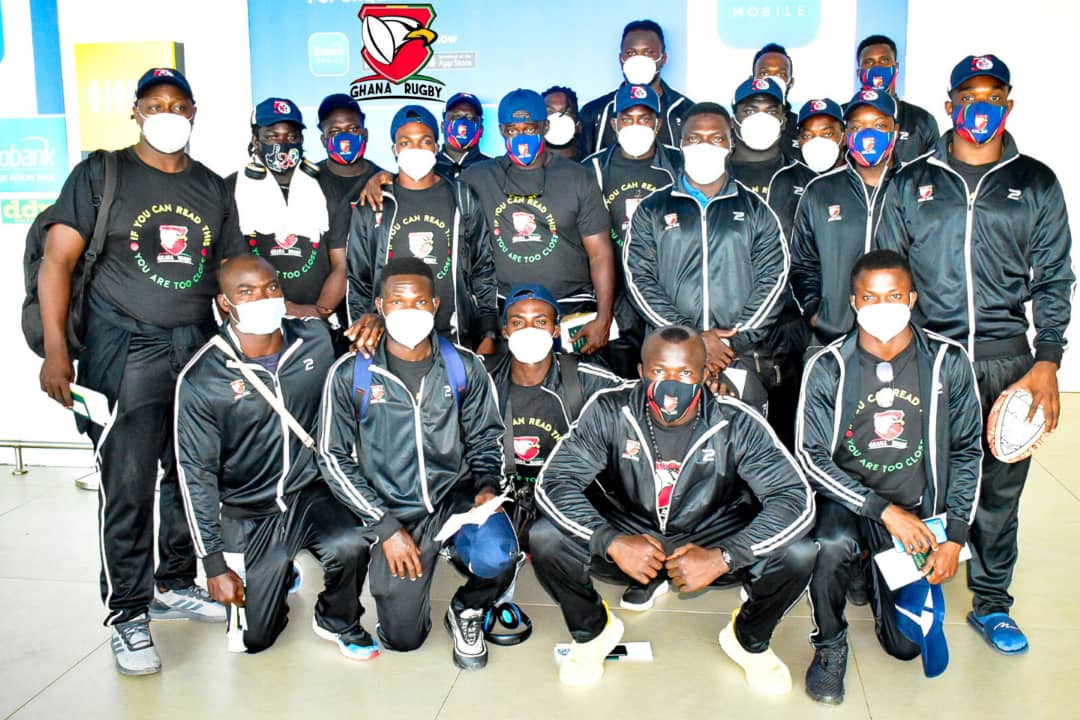 Ghana’s Eagles have arrived in Kampala, capital of Uganda for qualifiers to the 2022 Rugby World Cup.

With the Rugby Africa Cup kicking off on Saturday, African teams and unions are gearing up for entertaining competition as they travel through Africa to stand a chance to qualify for the 2023 Rugby World Cup in 2022.

With a collective effort to restart competitions, strict Covid-19 risk mitigations protocols have been communicated to all stakeholders in collaboration with unions.

This year the top 14 teams based on the African ranking will compete in a single coordinated competition until the last two face each other in the final in 2022.

Starting with the Rugby Africa Cup Repechage which was hosted by the Burkina Faso Rugby Union in the capital Ouagadougou at the Stade 4 Août stadium, from the 5 – 13 June 2021, till the last game to be played in Kampala, Uganda on 18 July, a total of 27 matches will have been played. About 40 match officials from 11 African countries have been deployed from Rugby Africa across the continent to support the hosting unions’ workforce.

Speaking about the qualifying rounds Vice President Rugby Africa and President of the Rugby Committee, Andrew Owor explained: “The stakes could not be higher for our unions. The second round of the Rugby Africa Cup will be played across four pools of three teams each in July in three different venues, namely Kenya, Côte d’ivoire and Uganda, the fourth one remains to be confirmed. The top two teams of each pool will progress to the third and final round of the Rugby Africa Cup in 2022. An 8 teams knock-out tournament played with quarterfinals, semi-finals and a grand finale will see the winner qualify directly for RWC 2023 and the runner-up compete in a global repechage tournament.”

Initially Tunisia was also meant to host the tournament. However due to the rapid escalation of Covid-19 in the country, Rugby Africa is reviewing their viability and assessing options.

Rugby Africa President, Khaled Babbou applauded all unions in their massive preparation and effort to get their home teams ready.

“There has been huge commitment from all of our hosting countries – Burkina Faso, Kenya, Uganda and Côte d’Ivoire. We are extremely grateful to local authorities in making these tournament possible and availing resources to local and out of country games. We appreciate the efforts made by all match officials who are dedicating their time to support the tournaments. I would also like to thank APO Group, Société Générale and World Flair for partnering with us.”

Kenya will automatically qualify and also host the 2022 Junior World Rugby Trophy at the Nyayo National Stadium in Nairobi, where the Barthes U20 Trophy is currently being played with the Kenyan, Senegalese and Malagasy U20 teams.

It is also the occasion to launch the matches of the Rugby Africa Cup Women, Kenya will face Madagascar twice in Nairobi; Uganda will meet Zimbabwe twice in Kampala while matches between Tunisia, Ivory Coast and Senegal are once again under consideration. The Cameroonians had defeated their Burkinabe sisters twice in Ouagadougou on June 9 and 12.

With the announcement of the new Global W15 annual competition, women’s 15s is high on the agenda and Africa needs to fast-track the development of competitive women’s teams, says President of Women’s Rugby, Paula Lanco.

“The annual WXV competition, starting in 2023, will have three tiers and is aimed at raising competitiveness in the build-up to an expanded 16-team World Cup in 2025. The objective with the 2021 series of matches is to assess teams, give an opportunity to as many teams as possible to showcase their talent before an adequate competition format is designed for next year’s qualification to the W15 competition.

By establishing a unified international 15s calendar and introducing WXV we are creating a platform for the women’s international teams to compete in more consistent, competitive and sustainable competitions at regional and global level.”

The schedule of games are as follows:

Distributed by APO Group on behalf of Rugby Africa.