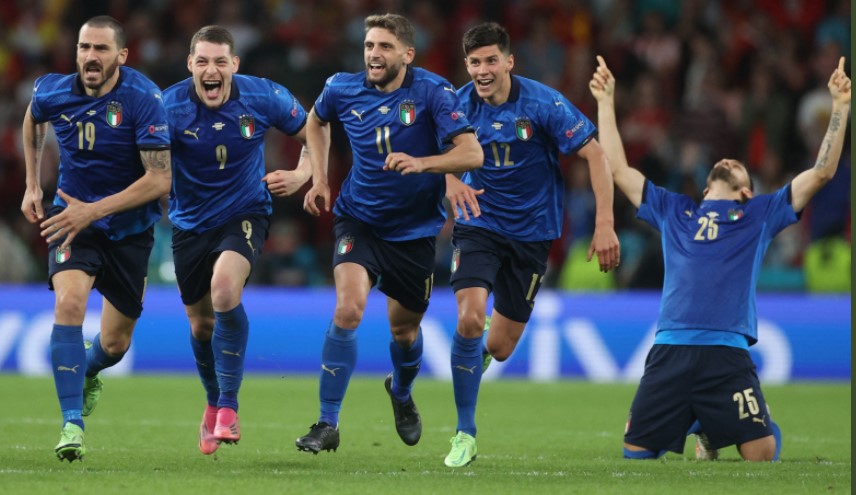 Italy beat Spain 4-2 on penalties after a 1-1 draw in a magnificent Euro 2020 semi-final at Wembley on Tuesday, as Jorginho converted the decisive kick to take the Azzurri through to the final of a tournament in which they have been the outstanding side.

They were not always on top in this game though, with Spain the better side for long spells of an epic contest before Federico Chiesa, the Juventus forward, gave Italy the lead with a fabulous finish an hour into a match watched by a crowd of almost 58,000.

The much-maligned Alvaro Morata, who was dropped from the starting line-up here, came off the bench to equalise with 10 minutes of normal time left.

No further scoring in extra time meant penalties again for Spain, who had beaten Switzerland in a shoot-out in the quarter-finals.

They had also beaten Italy on penalties at Euro 2008, but this time misses from Dani Olmo and then Morata saw Spain give up the advantage they had been handed when Manuel Locatelli failed with the first kick in the shoot-out.

The Italians celebrated at the end with a large contingent of their UK-based supporters, and a team that has been rejuvenated under Roberto Mancini continues to dream of winning a first European Championship title since 1968.

Now unbeaten in 33 games, they go through to Sunday’s final to face either England or Denmark, who meet in Wednesday’s second last-four tie.

It is nine years since Spain mauled Italy 4-0 in the Euro 2012 final in Kiev to win a third consecutive major tournament, and this was the fourth consecutive European Championship in which these powerhouses had met.