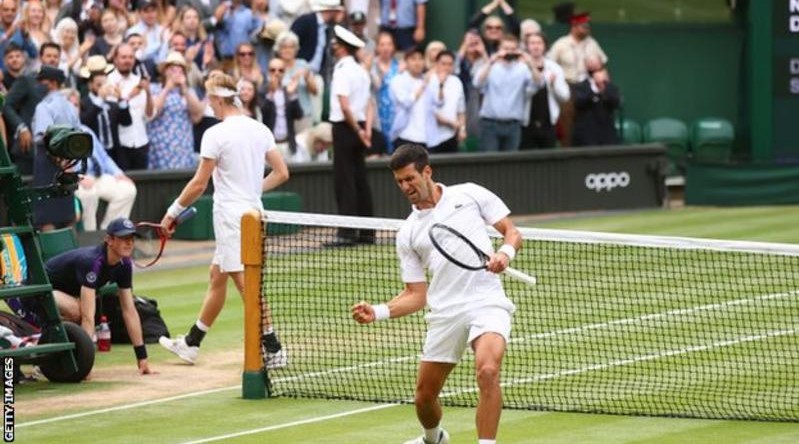 Defending champion Novak Djokovic needed all of his nous and quality to edge past Denis Shapovalov and set up a Wimbledon men’s final with Italy’s Matteo Berrettini on Sunday.

The seventh seed is the first Italian to reach the men’s singles final.

The Queen’s champion used his big forehand and serve to good effect to reach his first Grand Slam final, with Sunday’s showpiece taking place just hours before his nation take on England in football’s Euro 2020 final.

The 25-year-old is the first Italian man to reach a Grand Slam final since 1976.

“I have no words, really,” Berrettini said. “I need a couple of hours to understand what happened.

“I think I never dreamed about this because it was too much for a dream.”

Five-time Wimbledon champion Djokovic is now one more victory away from retaining the crown he won in 2018 and 2019, and therefore equalling the all-time men’s record of 20 major victories set by Roger Federer and Rafael Nadal.

But it was far from a straightforward passage for the 34-year-old Serb.

The world number one needed all of his skill and spirit to see off 10th seed Shapovalov in an entertaining contest which had Centre Court gripped.

In his first major semi-final, Shapovalov did not deliver in the key moments – and that proved costly.

“I don’t think the scoreline says enough about the match, he was serving for the first set, was probably the better player for the second set. He had most of the chances,” said Djokovic, who has reached his 30th Grand Slam final.

“I would like to give him a round of applause for all he has done this fortnight. We will see a lot of him in the future, definitely. He is a great player.”