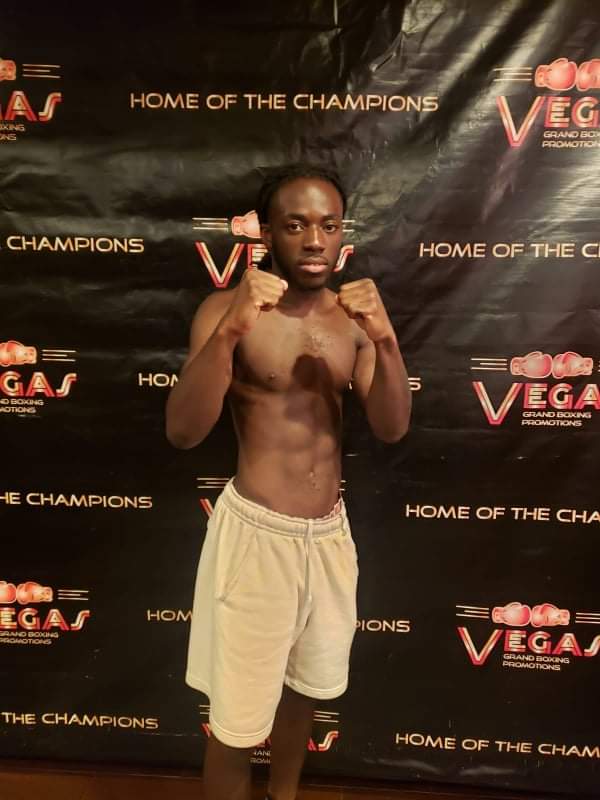 US born boxer of Ghanaian descent, Eslih Owusu (4-0, 2 KOs) is up in arms ready to secure another victory in his march towards his world title dreams when he faces the challenge of American, Trabon Farmer after both boxers made the required weight for their super welterweight 4-rounder Saturday night in South Carolina.

Rasta-haired Owusu tilted the scales at 156 lbs for just the fifth fight of his pro career, same weight at which Farmer came in at Friday’s weigh-in on the undercard of the Vegas Grand Boxing Promotions event.

It will be the first time Eslih Owusu will fight more than once in the same year since turning pro in 2018, with another clash against Brazilian, Aguilando Brandao already scheduled for barely a month later on August 14.

But his trainer, the legendary Daniel Oko Odamtten says his boxer whose last fight was only two months ago in Mexico after also coming down to fight in Ghana in December last year, is ready for the seemingly arduous task of taking 3 fights in three months.

“No, it’s not a problem at all, we are just trying to make him busy and bring the best out of him. He is a strong kid who can even fight every week,” Coach Odamtten told Sportsinghana.com after Friday’s successful weighs.

“We want to take one fight at a time and the focus at the moment is on Saturday’s bout against Farmer but that doesn’t mean we are not thinking about it (August 14 fight versus Brandao) because it’s only three weeks apart,” added Coach Odamtten who famously trained the great Ike Bazooka Quartey to win the WBA welterweight title in 1994.

But above all, the experienced trainer remains adamant it will be another resounding victory for his 21 year old protege once the curtain is drawn on Saturday evening.

“Our expectations for this fight is very simple, the team is expecting a great victory be it by decision or KO just to keep the fans and Ghanaians back home happy,” he intimated.

“We don’t know too much about him but I know much about my boy, no one will tell Farmer to go down until the punches start to rain on him,” Coach Daniel Odamtten affirmed.