Eslih Owusu wins in one, eyes Charlo-Castano but already plotting for next fight August 14 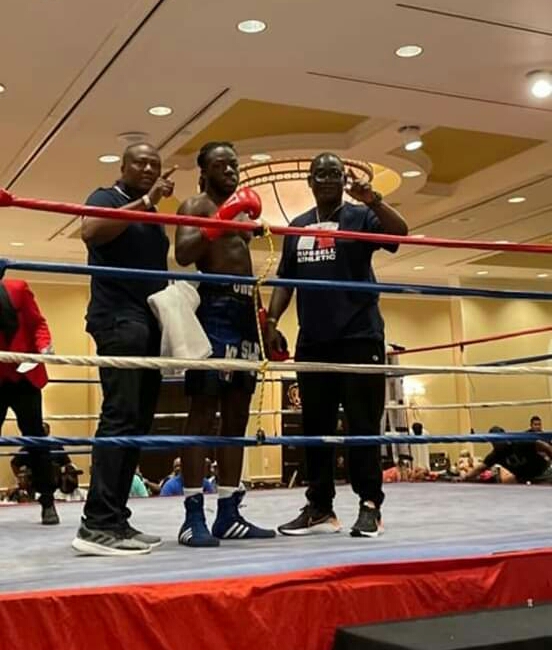 American born, Eslih Owusu (50, 3 KOs) maintained the perfect start to his pro career with a vicious opening round stoppage of Trabon Farmer Saturday night at the Marriot Hotel, South Carolina and is dreaming big after immediately watching the Jermell Charlo versus Brian Castano 154 lbs unification fight which of course ended in a split draw in San Antonio, Texas.

The 21 year old whose parents both come from Ghana, had been at work earlier in the night, having dispatched off his opponent in double quick time after coming out firing from all angles in their super welterweight contest scheduled for four rounds. A dominant Owusu dropped a flurry of jabs, hooks and uppercuts so much within two minutes, 30 year old Farmer was whacked unto the canvas and was done.

Owusu had secured the 5th straight victory at the beginning of his career with three knockouts to boot, but this was the fastest he has ever done it. For his coach, the vastly experienced Daniel Oko Odamtten however, the swiftness of the execution shouldn’t be a huge shock because his boxer’s hard work deserved a victory of such magnitude.

“No I wasn’t surprised by the knockout, it was a body punch and anybody can get dropped by that. Of course I wasn’t expecting that early knockout but I know if you take a punch early in a round then you could be in trouble,” Coach Odamtten said after the fight.

“It was almost too easy which is a bit disappointing because we wanted to see Eslih work more. The most annoying thing is we have to pay for a cut man who didn’t do anything,” the experienced trainer added, almost in a burst of laughter.

Its victory number five in a row for the young boxer but it’s no time to celebrate yet for Eslih Owusu who heads straight back into the gym as preparations begin immediately for his already scheduled next fight against Brazilian, Aguilando Brandao within a month, August 14 in his hometown, Worchester, Massachusetts.

“First of all we would like to thank our fans around the world especially those back home in Ghana for their support and prayers. I promised them that nothing is stopping me from getting to the top. This is just the beginning,” said Team Eslih Owusu.

“We have to catch our flight back to Massachusetts tomorrow morning and start our preparations for August 14th, when we will give our fans another sweet victory,” Coach Oko Odamtten added.

Coach and boxer apparently watched the undisputed 154 lbs title unification split draw between WBC, WBA and IBF champ, Jermell Charlo and Argentina’s rugged WBO titlist, Brian Castano, the same division Owusu also fights and the trainer remains adamant his protege is not too far off competing at such level.

“Yes we watched the whole fight but like I said this is just the beginning, he is not too far at all. Don’t forget Eslih is only 21 years old. He will continue working hard and we will get there, I’m sure it won’t be too long,” Daniel Odamtten concluded.