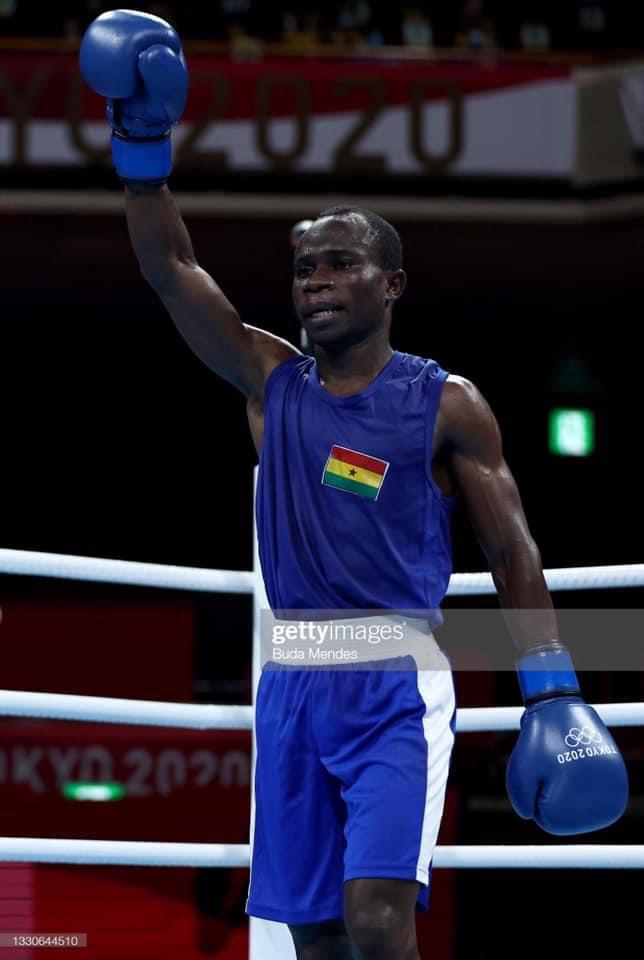 Ghana’s general captain at the 2020 Olympic Games, Suleimanu Tetteh set the stride in fashionable syle with a split decision (3-2) victory over Dominican Republic’s Marte de la Rosa Rodrigo in the Flyweight division to book a spot in the round of 16 of the Tokyo Olympics boxing event.

With the Minister of Youth & Sports, Hon. Mustapha Ussif and GOC President, Ben Nunoo-Mensah watching from the VIP stand, the experienced Black Bombers skipper started gently and dropped a point in the first, but gradually heated himself into the bout, winning the last two rounds to justify three of the five judges’ scorecards.

Tetteh who received full support from some officials in the Ghana contingent showed great serenity and technical ability, with quick movement and targeted punching to eventually overpower his opponent.

Three of the five judges scored in favor of Tetteh, while two scored for Rodrigo.
The London 2012 Olympian, Tetteh, thus progresses to the Round of 16 and a step closer to the medal zone.

“I told my family and friends, I’m not coming back empty handed and that stimulated me to go all out to get the first victory for Ghana,” Tetteh said post fight.

The two other Ghanaian boxers also representing the country at the Olympic Games will do battle on Wednesday July 28, with Samuel Takyi facing Jean Carlos Pachito Caicedo of Ecuador, and Light heavyweight, Shakul Samed fighting Malkan Bayram of Turkey.