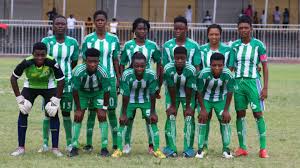 Sekondi Hasaacas Ladies coach Yussif Basiqi says that, they are not expecting AS POLICE to defend against them on Friday but rather change their game plan by attacking them.

Coach Basiqi who was in the stands to watch his opponents go down heavily by 5 goals to nil at the hands of Rivers Angel FC believes they have plan A and plan B to handle them after discussing with the players what they need to do and what to avoid in their upcoming match.

Speaking to the teams communication manager Felix Boansi on the positives taken from the game he said,

“As for the positives, we have already discussed it with the players on what we need to do and what to avoid because we shouldn’t expect that they will be defending”

“So for us we have plan A and plan B”

Below is the upcoming fixtures and format;

Winner Group A vs Runner-up Group B

River Angels vs Runner-up Group A

Winners of the SEMI-FINALS