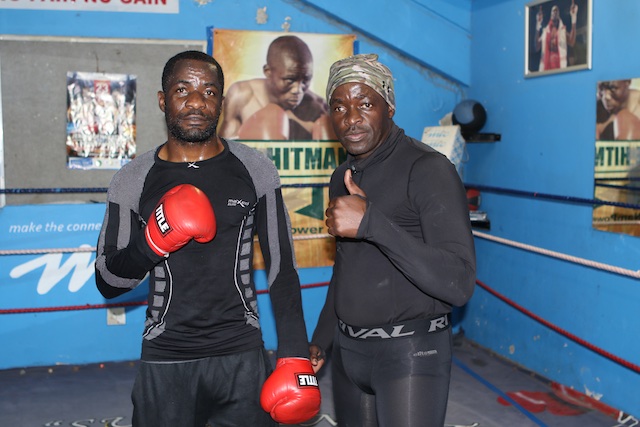 SEBASTIANUS Natanael and his promoter Nestor Tobias have arrived and settled in well in Accra, Ghana ahead of tonight’s fight against John Laryea at the Bukom Boxing Arena.

Natanael, who has a record of 14 wins and two defeats, won the WBO Africa featherweight title in his last fight in April when he beat Jeremiah Mhere of Zimbabwe on a first round knockout, and will now make his first title defence against the youthful and promising John Laryea of Ghana.

Laryea, who is only 21 years old, is still unbeaten after nine fights, having won eight and drawn one, while he won the Ghanaian featherweight title in his last fight in March.

Tobias last week said that Laryea was a good prospect, but that he was confident that Natanael could win the fight.

“I know he can do it, he must just fight like it’s his last fight. It’s a very important fight that he must win, because then he will get a top 10 world ranking and his path to a world title fight will be open,” he said.

“Laryea is a young upcoming kid, and his camp has a lot of faith in him – they challenged Sebastianus for his WBO Africa title, but I have full confidence in him and we will just go there to defend our title,” he added.

Tobias and Nathanael arrived in Accra on Tuesday and according to Tobias they have settled in well.

“We have arrived safely in Accra – the accommodation and food is very nice, and the weather is very hot, but we are comfortable with it,” he said.

“There is a lot of interest from the media and we already had about 10 interviews at the airport on our arrival. Our ambassador Selma Ashipala also welcomed us on Tuesday and that is a great motivation for us,” he added.

Natanael, meanwhile, said he was fit and ready to face Laryea at one of his last training sessions in Windhoek last Friday.

“First of all I want to thank my coach for a spectacular job he has done in preparing me. I’m ready and I’m mentally and physically fit – I’ve been in the gym training the whole time, and I also want to thank the MTC Nestor Sunshine Academy for getting me a fight of this magnitude. I’m ready to successfully defend my title and I will do so,” he said.

The fight against Laryea was finalised shortly after he beat Mhere in April, and should have been held in June, but due to Covid-19 it has been postponed by a month. Natanael, however, just took a two week break following his victory against Mhere and has since remained in the gym, preparing for the Laryea fight.

Ï’ve been preparing for Laryea for about three months now and am in the best shape of my life, so I can’t wait for the fight to come,” Natanael said.

Regarding Laryea, he said he did not know much about him, but that he was not perturbed.

“I don’t know much about him, I watched one of his fights on Youtube, but I’m not worried about his style and or I know I’ll work him out,” he said.

“I just want to call upon the Namibian nation to get behind me and put me in their prayers, so that I can successfully defend my title and bring it back to Namibia,” he added.