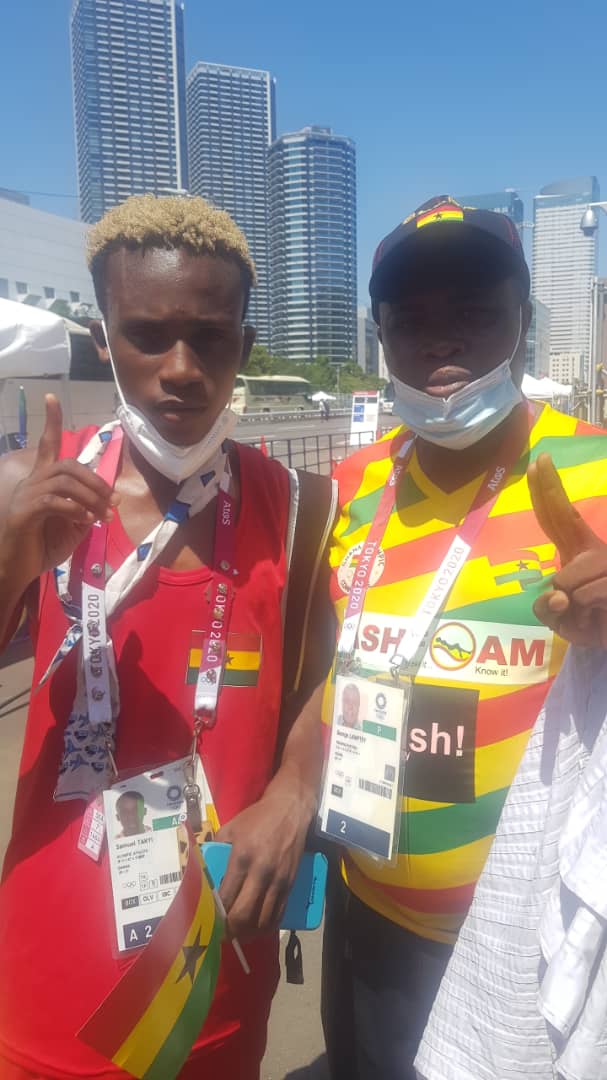 George Lamptey, President of Ghana Boxing Federation is still basking in the glory of Samuel Takyi’s passage into the semi-finals of the men’s featherweight boxing competition, but the man who was at ringside at the Kokugikan Arena for the 20 year old Takyi’s historic victory Saturday morning insists his protege is poised to go for qualification into the gold medal fight when he faces Duke Ragan of the USA early Tuesday at the Tokyo 2020 Games.

Takyi of course has already entered the record books as the first Ghanaian boxer to win a medal at the Olympic Games in 49 years and also the first to end the country’s medal drought since Barcelona’92, nearly nine years before he was born but the youngster is focused on the dream to do what nobody from this country has ever done, win gold.

“It felt so good and great the moment Takyi was declared winner against the Colombian, because all eyes were on us since most of the Ghanaian athletes were not doing too well. But we were not surprised with his comeback, he was full of confidence and we just kept cheering him on, myself and his teammates Sulemanu (Tetteh) and Shakul (Samed), we just kept telling him to keep fighting on, urging him to go all out and we were so glad he won, ” Mr. Lamptey said.

“You get into the medal zone and you feel vindicated but we are urging the boy in whom we have so much confidence to go on and win gold which is the ultimate. Ghana needs it now and Samuel Takyi and boxing will deliver it,” he added.

Takyi comes up against 23 year old Duke Ragan of the US who earned through this stage after disposing off Kurt Walker of Great Britain on split points, 3-2 after previously overcoming Samuel Kistohurry of France by the same 3-2 in his round of 16 bout before outclassing Serik Temirzhanov of Kazakhstan 5-0 unanimously in the quarter finals last Wednesday.

Now he stands in the way of Takyi who seeks to put Ghana in a position to fight for gold at the Olympic Games for the first time since the legendary Clement Quartey set the pace by winning silver in light middleweight at the 1960 Games in Rome, Italy.

But the Ghanaian amateur boxing chief remains adamant Takyi knows what’s at stake and will be ready for anything the American throws in the ring come fight time.

“It surely will be a good fight but Samuel Takyi’s determination and level of confidence will see him through. I watched the guy (Ragan) fight on the same bill, once he is an orthodox boxer, no problem. The coaches will work on Takyi,” George Lamptey told Sportsinghana.com from his Tokyo hotel.

“Now all we ask is prayers and support from the boxing fraternity and the whole Ghana. Boxing won Ghana’s only medal at the last Commonwealth Games in Australia and we have done it again at the Olympic Games, it speaks a lot about what we can do if we are given the appropriate financial and technical support,” the GBF President continued.

“We need support to build the technical aspects, that is coaches, referees and judges and give them exposure to international tournaments even if it’s in just West Africa or other African countries will help. Support in terms of financial or in products from corporate Ghana and remuneration for national team boxers who don’t work during preparations for these games,” Mr. Lamptey added.