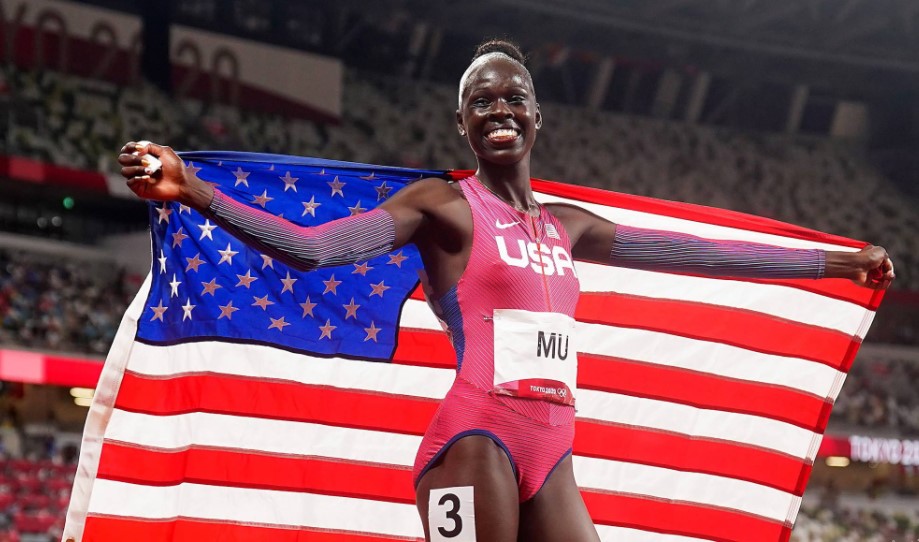 “It’s awesome. I feel like I’ve just accomplished one of my goals. I just wanted to be a medalist,” Mu told reporters afterward.

“I wasn’t really putting gold on that, but as it got closer to the final today, I was like, ‘Yeah, we want gold.'”

Great Britain’s Keely Hodgkinson, who is also 19 years old, stayed with the American to the finish and came away with a silver medal in 1:55.88. Mu and Hodgkinson set new American and British records, respectively.

American Raevyn Rogers was in seventh place with 100 meters to go and stormed past four other competitors to take bronze. Rogers now has an Olympic medal to go along with her silver from the 2019 world championships.

“Just being out there and being able to medal, it’s a really big deal,” Rogers said afterward. “I think it’s settling in. Just being able to take something back home, I’m really proud.”

The podium at the Tokyo Olympics features all-new medalists since World Athletics imposed a rule in 2019 that bars women with naturally high levels of testosterone from competing in events from the 400 meters to the mile without taking medication to lower their levels. As a result, gold medalist Caster Semenya of South Africa, Burundi’s Francine Niyonsaba and Kenya’s Margaret Wambui have all not competed in their speciality event.

In their absence, Mu has risen to the top of the 800 meters with one of the best combinations of distance runner strength and sprinter speed. Mu put together one of the best NCAA indoor and outdoor campaigns with collegiate records in the 400 meters (49.57), 800 meters (1:57.73) and 4×400 meter relay as a freshman for Texas A&M. She won the NCAA outdoor title in the 400 meters before opting to turn professional and sign a lucrative deal with Nike before the Olympic Trials.

At the Trials, she downed the deepest U.S. final field in history and won in 1:56.07, which made her the second-fastest American woman of all-time. Now she’s on top of that list and has a gold medal to hold for it as the best in the world.