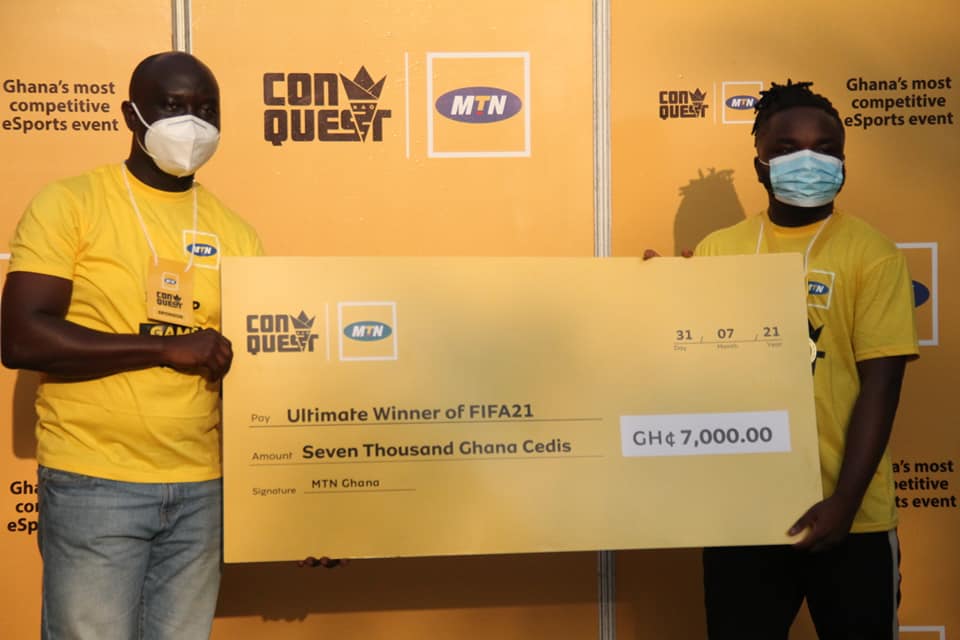 The second edition of MTN Conquest, Ghana’s most competitive e-sports and gaming tournament ended successfully on Saturday at the Esports Academy in Haatso, Accra with Wondha Kid emerging the biggest winner after taking home a cheque of GH¢7,000 (seven thousand Ghana Cedis) for topping the FIFA 21 category whilst he was also among the Invitational winners.

Nana Agyekum receives his dummy cheque for GH¢4,000 for finishing as runner-up in FIFA 21

First runner-up (FIFA 21) and with it a cool GH¢4,000 reward was Nana Agyekum who also earned the goal king gong whilst Sulley Habbib finished in 3rd place and received a cash prize of GH¢2,000.

As well, other Invitational winners were Guy Kobby and Sulley Habbib.

The maiden edition of MTN Conquest was held in Accra and Kumasi in 2019 with a pot prize of Ghs24,000, the biggest ever in the e-sports tournaments in Ghana. There were over 760 players who competed in FIFA19 and Mortal Kombat games with over 500 additional audiences at the venues.

Following a Covid-19 enforced cancellation last year, the competition returned this yea with an expanded qualifying series that were played at partner game centers in Accra, Kumasi and Koforidua to select the 32 players for FIFA and 12 players for Gran Turismo to compete for the grand prize beginning with a round of 16 on July 24, paving the way

for last Saturday’s grand event which began from the quarter finals.

“It is worth noting that Games serve as another source of income for people so beyond the fun it creates for the players and observers. It is quite intriguing that people sit in Ghana and connect with other people around the world to play competitive games to win very good sums of money,” said Yaw Antwi Boadu, Manager, Content audio/video, Products & Services, MTN Ghana.

“Today, MTN Ghana has made a commitment to support local gamers to play and also earn some money. We have been witnesses to the display of talent, skills and professionalism as finalists battled it out for the ultimate prize,” he continued.

Mr. Boadu added: “This year’s event has been one of the most entertaining and competitive e- sports event ever. We were happy with the enthusiasm with which the people registered to participate in the competition and for us as sponsors, we are convinced that gaming is gradually gaining roots in Ghana and with a little it will become one of the events people will look forward to.”