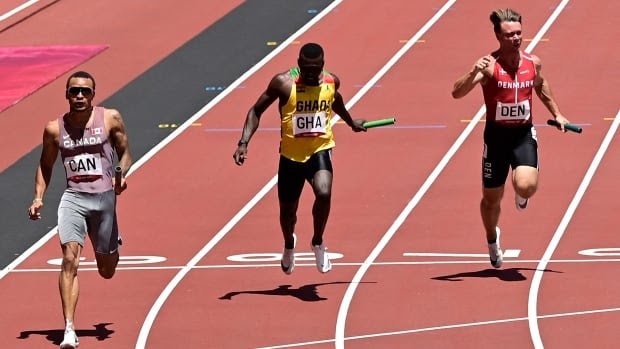 The Canadian squad, also featuring Aaron Brown, Brendon Rodney and Jerome Blake, finished second in its heat, just two-thousandths of a second behind China, in a time of 37.918 seconds.

Brown led off, followed by Blake and Rodney.

Canada was about fifth when De Grasse took the baton, but the five-time Olympic medallist nearly powered the team to first with his blazing final leg. The 26-year-old was the only man to enter both the 100 and 200 races in Tokyo, taking bronze and gold, respectively.

Thursday’s relay heat, taking place about 14 hours after the 200 final at Olympic Stadium, was De Grasse’s seventh race in six days, but he appeared no worse for wear.

“I was just trying to be there for the team. I knew in order for us to qualify for the final I had to just take one for the team. I came out here, I warmed up just to see where I was at and I told coach [Rana Reider] I’m ready to go and I’ll see what I’ve got,” De Grasse, of Markham, Ont., said after the race.

“This was [a] good opportunity for us. Of course we changed some things around, made some adjustments with the legs. But I’m feeling really confident about our chances going into the final,” he said.

Brown said he hadn’t previously been practising in the leadoff role. Perhaps as a result, the team experienced some shaky handoffs.

“I was trying to be versatile, trying to be where I need to be to be in a good position for a medal. We’re gonna clean that up in the finals … and go for gold,” said Brown, a 29-year-old Toronto native.

Canada won bronze in this relay at the 2016 Olympics with nearly the same foursome. Akeem Haynes took Blake’s place in the final, while De Grasse subbed out for Bolade Ajomale in heats.

That Canadian squad set a national record to reach the Rio podium at 37.64, a mark which still stands today.

Brown previously placed sixth in the men’s 200 in Tokyo, a career-best Olympic showing. Rodney failed to advance past heats in the event.

Italy, Great Britain, Japan, China, Germany and Ghana also qualified for the final, which is scheduled for Friday.