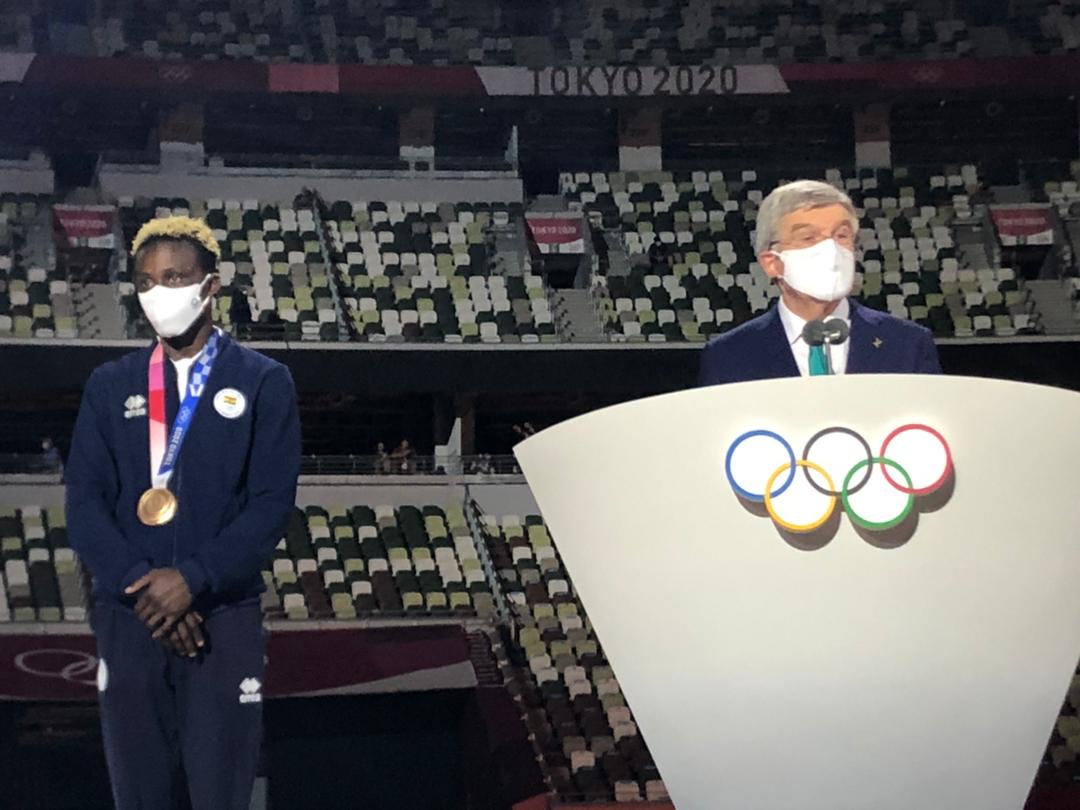 Samuel Takyi’s rise to fame keeps blossoming by the day after he was the special athlete at the side of International Olympic Committee (IOC) President, Thomas Bach as he delivered his speech at the closing ceremony of Tokyo 2020 Olympics which came to a close on Sunday, August 8 at the Olympic Stadium, Tokyo after more than a fortnight of competition in 33 sports across 46 disciplines staged in 43 locations, all for a total of 339 medal events.

It is safe to say the Games lived up to their hype, with new champions emerging and records being broken and set.

Kenyan athletes flew the African flag high at Tokyo and at the closing ceremony, no other national anthem rang loud as the Kenyan one, as the star men and women came to collect their medals.

Eliud Kipchoge and Peres Jepchirchir each got a gold medal, with compatriot Brigid Kosgei picking silver. As Kenya’s anthem played in Tokyo, one could see the joy on the athletes’ faces.

Kipchoge, the world record holder, broke from the rest of the field after 30km and went on to win a gold medal at the Men’s marathon, clocking 2:08:38. This was his second consecutive gold medal at the Games having won one at the 2016 Olympics in Brazil.

Two-time world half marathon champion Jepchirchir clocked an impressive 2:27:20 to claim Gold in the Women’s marathon, 16 seconds ahead of compatriot Brigid Kosgei.

The closing ceremony kicked off with the arrival of The Japanese Crown Prince Akishino and International Olympic Committee president Thomas Bach. The Japanese flag was then carried into the stadium, on the backdrop of a lovely violin theme.

Athletes from the different countries and disciplines began entering the stadium starting with Greece, led by Ioannis Fountoulis, who won silver in the Men’s Water Polo event.

The Refugee Olympic Team followed, with the flag held high by Hamoon Derafshipour. He missed out on a karate medal after finishing fifth in the Men’ 67kg category.

Algeria’s flag came next, with 22-year-old boxer Imane Khelif appearing at the stadium. Algeria failed to get a single medal at this year’s Olympics.

Next, it’s Armenia, with Armenian boxer Hovhannes Bachkov carrying their national flag after winning bronze in the men’s light division.

After representing Antigua and Barbuda in the Men’s 100m sprint, Cejhae Greene carried the country’s flag at the closing ceremony.

Uzbekistan came next, the flag being held by 21-year-old weightlifter Akbar Djuraev who won gold.

Ecuador followed, and Glenda Morejon carried their flag. Morejon participated in the Women’s 20km race but failed to finish.

Maicel Uibo was next as Estonia’s flag-bearer after finishing 17th in this year’s decathlon.

Estwatini’s flag carrier was by Sibusiso Matsenjwa. He ran is the Men’s 200m and made it to the semi-final.

The music being played by the Olympic parade was the Olympic march, written particularly for the Tokyo Games by composer, Yuji Koseki.

El Salvador’s flag came out next, with Yamileth Solorzano as the flag bearer. She finished 17th in the Women’s Featherweight.

Mathew Belcher carried the Australian flag as he entered the stadium. He brought home Gold along with partner Will Ryan in the men’s 470 sailing class.

Andreas Mueller carried Austria’s flag. He competed in both the men’s Omnium and Madison in cycling.

It is important to note the order in which the athletes’ parade came was based on the Japanese alphabet.

ALL ATHLETES COME OUT:

All athletes who participated in the Games emerged from all corners of the Stadium.

The flag parade went on with Ghana next. Samuel Takyi, who won bronze in Men’s Featherweight boxing carried their flag.

Guyana was represented by Emmanual Archibald, who ran the men’s 100 metres.

Kenya’s Peres Jepchirchir, gold medal winner in the Women’s marathon was awarded at the closing ceremony, along with compatriot Brigid Kosgei, who received her Silver at the podium. The beautiful Kenyan national anthem was then played for the first time played.

Eliud Kipchoge, the record-breaker, was also given his Gold medal at the podium. Kipchoge made light work of other athletes in the Men’s marathon. As the Kenyan national anthem played again, jubilation could be seen in Kipchoge’s eyes – the pride and satisfaction of representing a whole nation.

The Kenyan national anthem rang through the Olympic Stadium in Tokyo, as the world witnessed another show of Kenyan dominance at the Olympics.

An orchestra takes over, with beautiful tunes at the closing ceremony of the Tokyo Olympics.

The Olympic flag is lowered

The Olympic anthem played as the Olympic flag was lowered, signifying an end to the 2020 Tokyo Olympics. The Olympic flag is handed to the Mayor of Paris Anne Hidalgo from the Governor of Tokyo, Yuriko Koike.

International Olympic Committee president Thomas Bach concluded with a speech, thanking everyone who made sure the pandemic was not a hindrance to holding the Games, having been postponed last year.