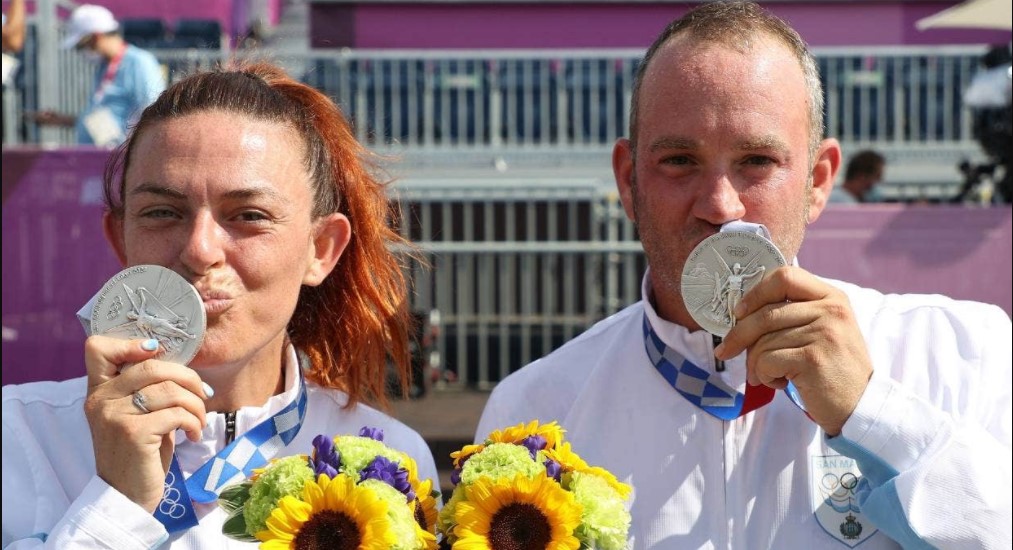 The tiny European country of San Marino has finally won its first Olympic medals, some 61 years after makings its debut at the 1960 Games.

The microstate is the world’s fifth-smallest nation, taking up just 61 square kilometres of the European continent and home to around 33,860 citizens.

But on Thursday, July 29, it became the smallest country in history to win an Olympic medal.

But, what is an even bigger achievement for San Marino is it winning three medals after only sending five athletes to the Tokyo Games.

Alessandra Perilli won bronze in women’s trap shooting, having narrowly missing out in London 2012 when she was first to miss in a dramatic three-way tie shoot out during the same event.

Perilli was extremely happy to get on the podium in Tokyo after her past disappointment.

Perilli was extremely happy to get on the podium in Tokyo after her past disappointment.

“I am very proud because we worked to get here,” she said after collecting her medal.

“In London, we got near the medal, but not on the podium. Now we have reached the podium. During the final, when the fifth shooter went out, I thought, I don’t want to be one more time in fourth place, so I have to make it.

“This is not my first Olympics, but this is the first medal for me and for my country. We are a small country but very proud.

“They are for sure going crazy, crying. I don’t know, but for sure now they are. There was no pressure, but only support from my country, from my team, from my federation and the Olympic committee.”

Perilli also won a silver medal with Gian Marco Berti in the mixed trap shooting at the Alaska shooting range, losing to Spain, but beating the USA.

Amine matched up with India’s Deepak Punia, a 2019 world silver medallist, beating him 3-2 with a last-minute single-leg shot to win.

Amine, from the US state of Michigan, represented San Marino because of his family’s Sammarinese citizenship, the Detroit Free Press reports.

His mother’s grandfather came to the US from San Marino in the early 1900s. By applying for, and receiving, the right to represent San Marino, Amine and his older brother, Malik, cannot formally represent the US in international wrestling competitions.

Amine said the decision to switch was tough.

“My brother and I, we both pledge allegiance to the United States before anything else,” Amine told the Livingston Daily in 2019.

“It’s the country we live in. I would have been able to compete for a spot, and very well had a chance to make the team.

“We both decided the opportunity to wrestle for San Marino creates a much more unique situation where you get to go overseas and compete against the best competition in the world on a very consistent basis.

“It had nothing to do with national pride. If I had my way, I would wrestle for both countries. The opportunity to wrestle for San Marino was better in our situation.”

San Marino welcomed the Amine brothers with open arms. Myles Amine became the country’s first-ever Olympic wrestling qualifier after his fifth-place finish at the 2019 world championships, then served as one of the country’s flag-bearers, alongside swimmer Arianna Valloni, during the 2020 Olympic opening ceremony.