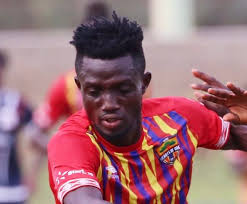 Ghana Premier League survivors, Elmina Sharks are preparing a bid for Hearts of Oak for their duo Michelle Sarpong and James Sewornu.

Ahead of the 2021-22 football season, the Sharks will be looking at bolstering their squad as they aim at making a case for themselves after escaping relegation following a 1-0 win against Kotoko in Obuasi.

Mo TV news report that the management of the club are interested in bringing Sarpong and Sewornu to the Nduom Stadium next season on loan.

Though official bid haven’t been sent yet to the Phobians, it is believed that the Elmina-based club will in the coming days officially write to Hearts for the two players.

The Auroras graduate, Michelle Sarpong was not part of Hearts of Oak’s players who did their medicals last week ahead of next season’s CAF Champions League.

Sarpong and Sewornu saw little game time in the just ended season and it is likely both will be out of the club this summer.