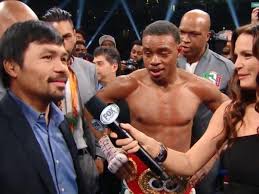 Yet another of the summer’s biggest fights has fallen through as Errol Spence Jr. has been forced to withdraw from his planned WBC and IBF welterweight title defense against the legendary Manny Pacquiao. Spence suffered a retinal tear that forced him out of the bout.

“I’m very disappointed that I won’t be able to fight Manny Pacquiao.” Spence said in a press release.

“I was excited about the fight. Unfortunately, the doctors found a tear in my left eye and said I needed surgery on it ASAP and that there was no way I could fight with my eye in that condition.”

Ugas was already scheduled to face Fabian Maidana in a title defense in the night’s featured undercard bout. He was promoted to “super champion” status due to Pacquiao’s inactivity after Pacquiao won the belt in July 2019 over Keith Thurman.