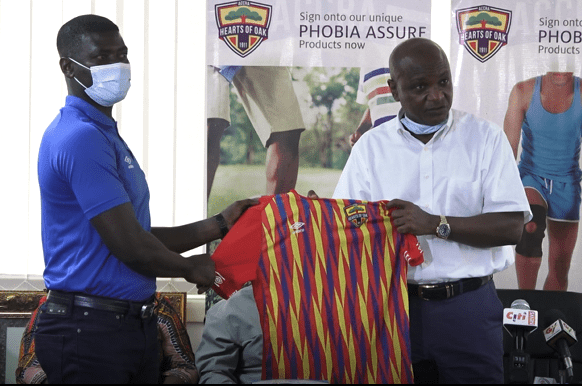 The Board Chairman and majority shareholder of Accra Hearts of Oak Togbe Afede XIV, has labeled head coach Samuel Boadu as ‘one and only’.

The Hearts of Oak chief, together with the entire board members – hosted the team at the residence of the board chairman. This was done to formally receive the players and technical members of the team.

The occasion was also used to formally present trophies won by the team at the end of 2020/21 season. Accra Hearts of Oak ended the just ended campaign as winners of both Ghana Premier League and FA Cup, making them automatic winners of Super Cup.

Hearts of Oak players enjoying themselves at the dinner

Addressing the entire playing body, Togbe Afede XIV stressed the need for discipline in a team.

“We have been here because of discipline among the players,” Togbe Afede said.

Indeed, discipline as mentioned by the board chairman is amongst other things, the key ingredient that has propelled the team to this feat. Players exhibited maximum discipline which reflected on the field of play. Off the field, not a single day was spent to discuss any form of misconduct by players at either training grounds or before, during and after a match.

Serious implications have been witnessed from a team that has been engulfed in misconduct issues. Accra Hearts of Oak technical members ensured that did not raid the team to derail their efforts.