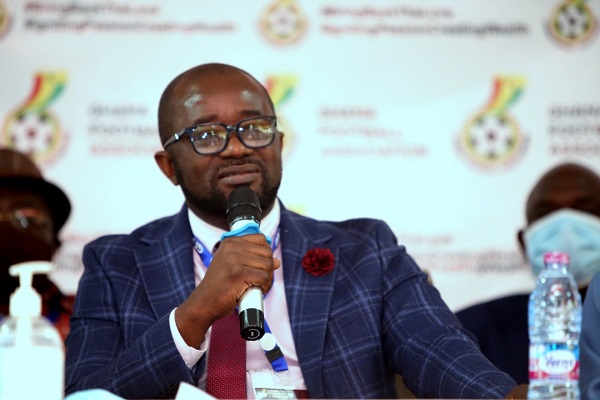 Ghana FA President Kurt Okraku has issued out a stern warning to all those involved in the alleged match fixing scandal which rolled the GPL on the last day of the season.

Inter Allies defender Hashmin Musah scored two deliberate own goals in their game against Ashantigold in Obuasi alleging that he had heard there was a bet placed on that fixture even before the commencement of the game.

Speaking at the launch of the Division One League Super Cup at the GFA secretariat on Wednesday, Kurt Okraku insisted those faceless cowards who are behind the act should get ready for him because he will chase them out of the system.

“Our sports has been attacked by faceless cowards and its my responsibility and the executive Council to defend the passion of the nation,” the GFA boss said.

“Everybody who played a part in that act will face the consequences, if you are here and you know you played a part, get ready to face the full rigours of your actions,” Mr. Okraku said.

“Don’t call me because you didn’t call when you wanted to play that role and those who are calling my phone regarding the betting scandal must stop,” he warned.

“To quote the former president of United States of America, we will chase them out of their hiding places,” Kurt Okraku affirmed.