Coach Akonnor flies out to Yaounde for AFCON 2021 draw 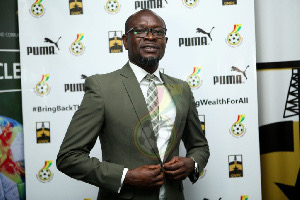 Black Stars coach, C.K. Akonnor will leave Ghana on Sunday August 15 to attend the final draw of the 2021 AFCON tournament in Cameroon.

The National team gaffer will be accompanied by the Director for international competitions at the Ghana FA, Mr. Alex Asante for the draw on Tuesday when Ghana’s opponents for the tournament will be known.

The draw for the TotalEnergies Africa Cup of Nations, Cameroon 2021 will be held at Yaounde Conference Centre on the 17th of August 2021, and will see the 24 participating teams divided into six groups of four teams each.

The 24 qualified teams will be allocated to four pots of six teams each, based on the FIFA/Coca-Cola World Ranking, to be released on 12 August 2021 (the last ranking to be released before the date of the draw).

A ball from a team pot will be drawn, followed by a ball from one of the group pots, thus determining the position in which the respective team will play.

Cameroon will be pre-assigned to position A1 as hosts. The remaining five teams in pot 1 will automatically be drawn into position 1 of each group (B to F). The same procedure will be repeated for the remaining pots.