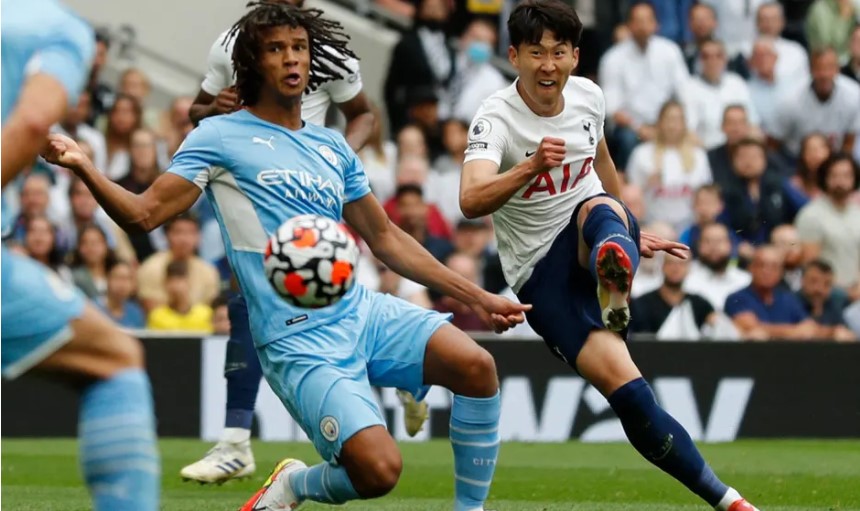 Sometimes football can be reassuringly familiar. This was Manchester City with the flaws on the outside; this is what they look like when things go wrong, as they have twice before against Nuno Espírito Santo sides, and weirdly often against Tottenham. Football’s finances may be ruined and the game sinking into a moral mire but there is still comfort to be drawn from teams, despite it all, remaining resolutely themselves.

City began with great pace and urgency, slicing Spurs open so frequently the game might have been over within 10 minutes. But then having failed to score, the mechanisms became gummed and, more troublingly, they looked extremely vulnerable on the counter‑attack with Lucas Moura a constant menace.

Of course City were the more proactive side, despite being without numerous first-teamers – clubs with the essentially unlimited resources of a state should be – and of course they will win most games, but this is how they lose them, with a slight wastefulness in front of goal and a carelessness against the counter.

The opening goal may have been against the run of play but its sources were no great surprise: Moura hooking a ball clear to Steven Bergwijn who led the charge, feeding Son Heung‑min on the left who cut inside and bent a shot into the far corner. Benjamin Mendy had already seemed on borrowed time at City but Nathan Aké, too, may soon be joining him on a one-way trip to Lommel.

As for arrivals, on this showing City could do with a centre-forward, a midfielder and a left-back. Harry Kane, who may fulfil the first of those needs, was not in the Spurs squad but what that means is debatable.

When Luka Modric was left out of Tottenham’s first two games of 2012‑13 it was a precursor to his departure for Real Madrid, but that Kane was not involved does not necessarily mean he is on his way to Manchester. He has, essentially, played his hand by returning to training a week late (although he claims that had always been planned) but remains at Spurs. City’s reluctance to make a formal offer anywhere near Tottenham’s valuation could be a negotiating tactic, or it may mean they have given up on signing Kane in this window.

Spurs insisted Kane was not selected because he is not fit enough, having taken part in only two training sessions since returning. But, while that may be factually true, it tells nothing like the full story. Every other player who started the final of the Euros for England managed at least some pitch time this weekend. Whatever ends up happening, the Kane affair has disrupted the start of this season for Spurs.

The mega-signing City have made, Jack Grealish, the sixth most expensive player of all time, flickered without ever quite catching light. He resembles some terrifying footballing chimera: the impishness and drive of Paul Gascoigne, rolled down socks of Francesco Totti, the massive calves of Roberto Carlos, the bandaged left wrist of Gary Lineker at the 1986 World Cup, the hair of Cameron Diaz in There’s Something About Mary.

Having come off the bench in the Community Shield and operated on the left wing, here he was deployed on the left of the three midfielders, although early on he was so high he seemed almost to be playing as a second striker alongside Ferran Torres.

At Villa Grealish was the most fouled player in the Premier League (by an astonishing margin; 45% more than Wilfried Zaha, who was second, and more than twice as often as all but three other players). The theory had been that he would struggle to maintain that level at City, where less of the play is likely to go through him, but in terms of getting kicked, this was a very encouraging start, fouled five times against an average of 4.2 per game last season.

And it is not just that Grealish is a great drawer of fouls; he is a drawer of great fouls. One does not forget Grealish being fouled, whether he is stumbling, doing his utmost to carry on and then collapsing, spinning into the air after a tap on the ankle, grimacing and rolling, or hopping away dragging a recently kicked calf behind him. His clashes with Fernandinho in training must be mesmerising: the great disguiser of fouls against their great highlighter.

But City will need more from him and from others. For a club of their resources the excuse that they had a lot of players unavailable elicits little sympathy. Early-season setbacks are not unfamiliar to City and there are mitigating factors but where there may be a concern is in the familiarity of the failings.

For Spurs, meanwhile, there was a welcome reminder that they can play well and can win big games even without Kane. The Nuno era is off to a very encouraging start.