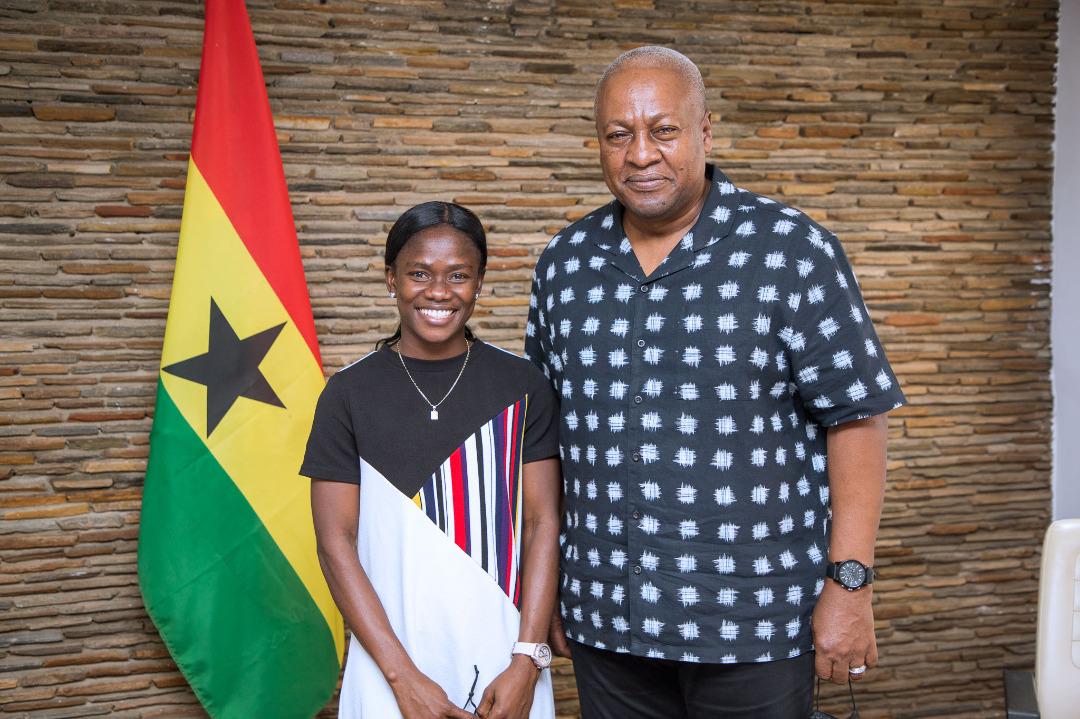 MONDAY, August 23, will be exactly seven years when Ghana erupted into a transport of joy as one of its proud daughters – Martha Bissah, won gold at the 2014 Olympic Youth Games in China.

It was the nation’s maiden Olympic gold medal, and the first in athletics at such level; and it got the leader of the nation at the time – John Mahama, celebrating her achievement.

Last Wednesday 12 August 2021, Martha met Mr. Mahama, at his residence in Accra. The mission was simple: to express her profound appreciation to the ex-President for his support after winning that earth-shattering gold medal in Nanjing-Jiangsu, China – almost seven years ago.

As President at the time, Mr. Mahama presented a cash gift of GH¢10,000 to the burgeoning middle distance runner at the Jubilee House for that tremendous honour bestowed on Ghana.

Martha had not seen the ex-President since she left the country in 2015 after an indefinite suspension was inhumanly slapped on her by the Professor Francis Dodoo-led Ghana Athletics Association (GAA).

The suspension barred the 800m gold medalist from participating in any GAA-sanctioned events – as well as representing the nation at any international athletic competition.

Ms. Bissah’s suspension has been a matter of grave concern – not only to the good-thinking members of the public but to a world that had just started monitoring the performance of the then 17-year-old athlete.

Martha was suspended indefinitely in 2016 by the GAA for what it claimed was an act of indiscipline by the athlete and thus plunging the name of the association into disrepute with false allegations.

The poor athlete had indicated that there were moves to split her gift, an attempt her mum valiantly fought off.

It was also alleged that the GAA had demanded Martha and her family put down $2,500 for her airline ticket, following a private initiative made to secure her scholarship to a United States institution. The athletic body has since rejected the allegation.

To put it placidly, however, the ‘presidential gift’ was later to become a ‘golden curse’ following the ban.

Scores of eminent sport personalities have come pleading for the athlete, to no avail.
Utterly frustrated, she decided to ditch her favourite sport for something else, until ex-Athletics boss George Lutterodt and former national athlete Kwaku Nimako came to her rescue by landing a scholarship for her at the Norfolk State University, USA.

As already known, Martha’s track and field achievements at Norfolk have been phenomenal as she itches to compete for Ghana again when her suspension is ultimately lifted.

“I have not wronged the GAA and therefore their decision to place an indefinite suspension on me is absolutely unfair.

“I love Ghana and I’m itching badly to compete in the red, gold, green colours of the nation,” she told this writer at the weekend.

Well, Martha – now 23, had on June 23, this year, written to the current Minister of Youth and Sports, Mustapha Ussif, to intervene in the matter and nail it once and for all.

Her petition to Mr. Ussif is nearly two months now and nothing has been heard about it so far. Maybe, the minister was busy with the Tokyo 2020 Olympics. It is over now and many expect to see some action taken on the issue promptly.

Former Youth and Sports Minister, Mahama Ayariga had failed to resolve this Martha Bissah-GAA entanglement when it was brought before him. The letdown stretched to other sports ministers like Dr Ahmed Mustapha (2015), Nii Lantey Vanderpuye (2016) as well as Isaac Kwame Asiamah (2016-2020), who directed his deputy Pius Enam Hadzide, to take up the issue, to no avail.

It is so disheartening, and perhaps off-putting to see how five strong sports ministers failed miserably to find a way around this bad blood and allow the poor girl to pursue her career calmly. It is simply inconceivable!

Most likely, the present Sports Minister would not want to be part of the disappointing bunch. If for nothing at all, Mr. Ussif should be proud to beat his chest one day that he was the one who brought finality to this protracted case. He would not want to be remembered for failing this test.

It is sad, really heart-rending to subject the girl to more than 120 months of mental torture of strappado in the name of vengeance. Indeed, what does the GAA stand to gain by allowing Martha to suffer all this while when she could be running and winning gold for Ghana?

That they would be celebrating Martha’s misery if they succeed in flushing her out, or bringing her career to an abrupt end? Would that be worth the champagne popping – instead of seeing her clinch another gold on a much bigger platform?

Rather than continue to take hardline position on her, we must do everything as a nation to ensure that we do not continue to jeopardize her career.

Indeed, her future must be the nation’s prime concern. Nothing else! It would be a disgrace of international proportions if we watch our own Youth Olympic Gold medalist slip into the abyss, because of some venomous show of power.