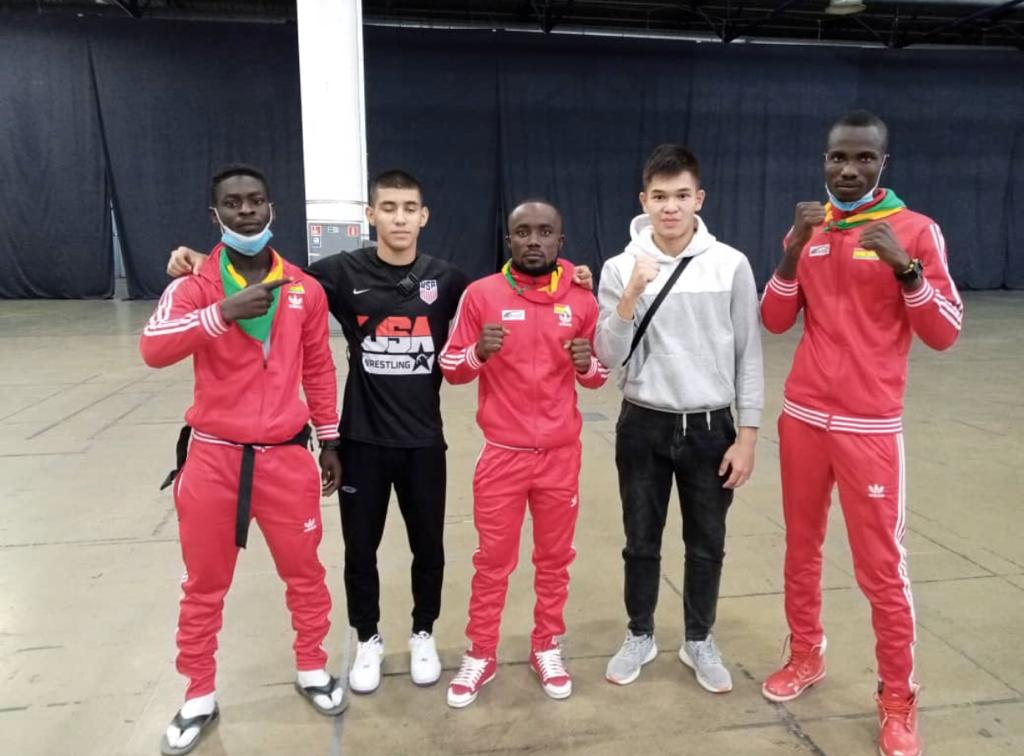 Ghana’s 3-man team to the 2021 Combat Ju Jutsu world championship have arrived in the Ukraine capital, Kiev and successfully gone through mandatory weigh-in in set for fight action on Saturday.

Ghana, one of three African countries at the 32-team global event, landed in the European country on Friday after travelling from Accra a day a earlier through Cairo, Egypt.

Team captain, Abdul Malik Adjei on the scales weighing in for his bantamweight competition at the 2021 Combat Ju Jutsu World championship in Kiev, Ukraine

Having arrived at Urban Sports City Arsenal Sports Complex where the 3-day tournament is taking place, there was no time at all for the triotrip to rest as they were immediately directed to the weigh-in session to determine their qualifications to fight in their respective categories.

Team captain, Abdul Malik Adjei who is fighting at bantamweight, came in at 57kg, Isaac ‘Zongo Fire’ Dowuona who is also a pro boxer, weighed 63 kg ahead of his bid for glory in the lightweight division whilst Ishmael Lantei Lamptey who will compete at welterweight, tilted the scales at 69 kg as they all anticipate appearances on the podium.

Meanwhile, all three Ghanaian representatives will know their respective opponents tomorrow morning but Team leader, Evans Bernie-Johnson, also Executive Director of the Professional Combat Sports Association of Ghana (PROCSAG) remains resolute in his belief that the athletes will bring laurels home on their first ever participation in the world event.

“It was a bit of a long journey but we are here and we thank God so much for bringing us this far. However we are not here for sightseeing but to raise the Ghana flag high, the fighters know that and remain focused on the job at hand,” Mr. Bernie-Johnson told Sportsinghana.com from Kiev.

“We will make sure they remember Ghana’s name after this championship, we also need to impress Ghanaians and our few supporters on what this sport can bring to the country. So this is no time to talk but rather focus on our preparations for the fights when we know our opponents tomorrow,” he added.

Ghana will be competing at the Combat Ju Jutsu World championship for the first time ever and along with Uganda and Egypt, are the only sides from Africa in the 32-team line up for the 2021 chase for medals in adults 18+, juniors 16-17 years and cadets 12-15 years divisions.