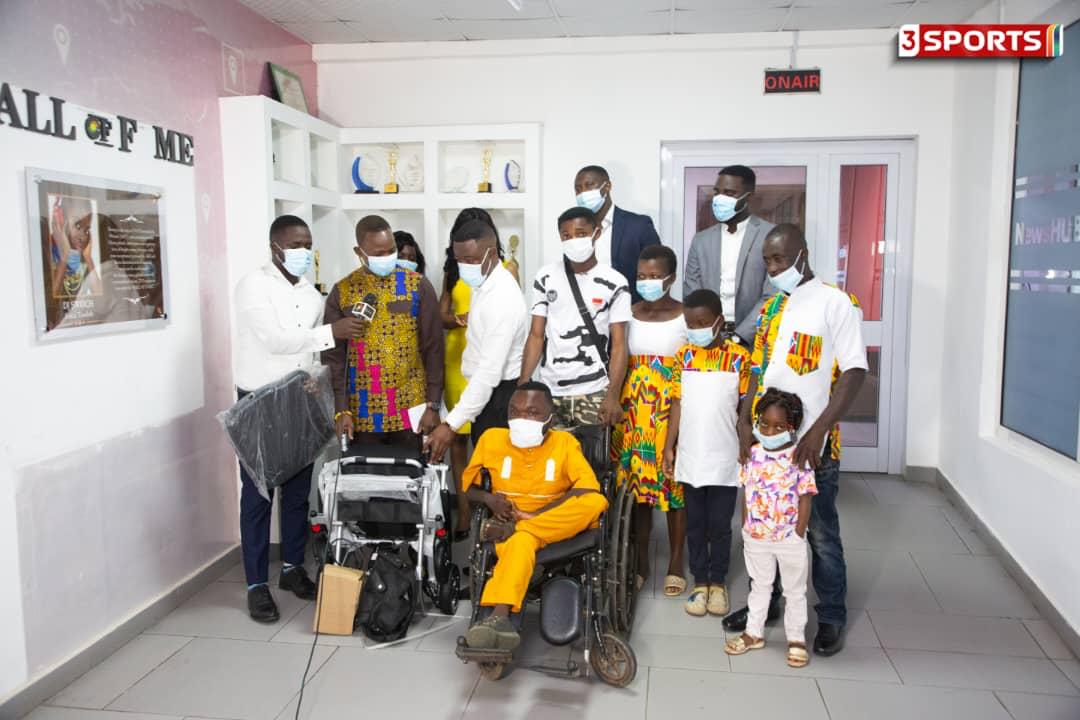 When Antwi Johnson was running commentary on the Hearts and Kotoko Super Clash weeks ago, he had very little knowledge on what was to follow.

Long yearning for help, he would later make them known to the 3Sports team.

Antwi has been resilient all the while. At age 6, he was hit with the news of not being able to use his legs anymore but that did not deter him from pushing through his goal of becoming a commentator. At the KNUST, he continued to hone his skill and has since been at it.

One of such is Black Stars midfielder Mubarak Wakasu who took care of the cost for a fully functional electronic wheelchair worth $2,000, attending to one of the many needs he listed.

At a short presentation today, Media General’s Group Head of Sports, Juliet Bawuah and General Manager for TV, Francis Doku underscored the importance of impactful journalism, adding that it sits with what the 3Sports team is made of.

“When Kelvin Owusu Ansah and Daniel Yeboah went to cover the Super Clash, they decided to do a story on our colleague Baggio. Little did we know the story will have a life of its own. I would like to say a big thank you to Mubarak Wakaso who did all this for Baggio. He bought a wheelchair and gave him money. For us this is what defines us and the work we do here at Media General and 3Sports, impacting lives through storytelling and also journalism that inspires,” she said.

“This is what we do. We try to impact lives with everything we do. We also thank Mubarak Wakasu for helping us to achieve some of the things. On behalf of the management of Media General and our group CEO Beatrice Agyemang and most importantly the Sports team led by Juliet Bawuah for their utmost dedication and intriguing stories,” General Manager for MG TV, Francis Doku added.

Antwi was given an extra amount of $500 dollars also from Mubarak. He expressed his profound gratitude to the Black Stars player.

“I thank Media General for airing my story. Since then it has impacted a lot on my life. I also thank Mubarak Wakasu, I am so grateful. I doff my heart for him and may God bless him in whatever he does,” Johnson Antwi said.

While the gesture will substantially help Antwi, it also represents a significant working tool he needs for his daily mobility and craft. For the 3Sports team, this is representative of impactful sports journalism.