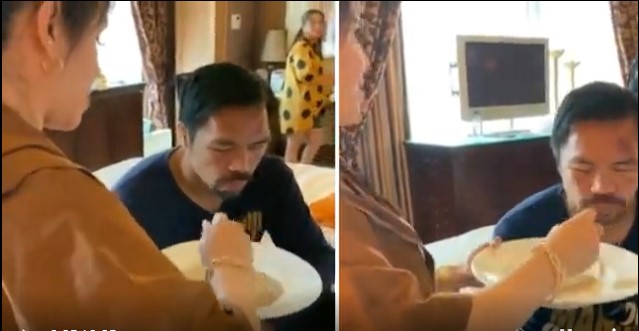 Manny Pacquiao appeared to struggle to open his eyes as he was being spoon-fed by his wife in a video posted just days after his defeat against Yordenis Ugas.

The 42-year-old, who is one of the most decorated fighters of all time, was soundly beaten in his welterweight world title fight against Ugas on Saturday night.

Pacquiao was making his first return to the ring after a two-year hiatus and had been due to fight undefeated welterweight champion Errol Spence Jr before Ugas stepped in as a late replacement after he suffered an eye injury.

Despite his inactivity, the Filipino icon was heavily fancied to win.

But Ugas ripped up the scrip and executed his game plan to perfection in Las Vegas, utilising his jab to great effect to take a unanimous points decision.

Pacquiao sustained damage to his eye in the fight and required five stitches on a cut near his left eye. On Tuesday, he went to see an ophthalmologist – an eye-injury specialist – who are continuing to monitor his injuries while he recovers.

The extent of his injuries were revealed this week when his wife Jinkee, who he shares three children with, uploaded a video on Instagram of Pacquiao barely being able to open his eyes as she spoon-fed him a meal.

The eight-weight world champion is widely regarded as one of the finest fighters of his generation and was urged to hang up his gloves and close the curtain on his 26-year career following his defeat against Ugas.

Fans in their droves took to social media after the fight and insisted Pacquiao, who also has a political career and is currently serving as the Philippines’ Senator, has nothing left to prove.

Pacquiao himself admitted he is leaning towards retirement, saying this week his mind is split 60-40 in favour of walking away from fighting.

In his post-fight press conference he said: ‘In the future, you may not see Manny Pacquiao fight again in the ring.

‘I don’t know. But for how many decades, I’m so happy with what I’ve done in boxing.

‘I contribute a record in boxing also and to make boxing the top. And especially bring honour to my country and the Filipino people. I’m so proud to be a Filipino and thankful to all the fans all over the world.

‘I don’t know if I’ll fight again. Let me relax and think about it. I want to help my people.’