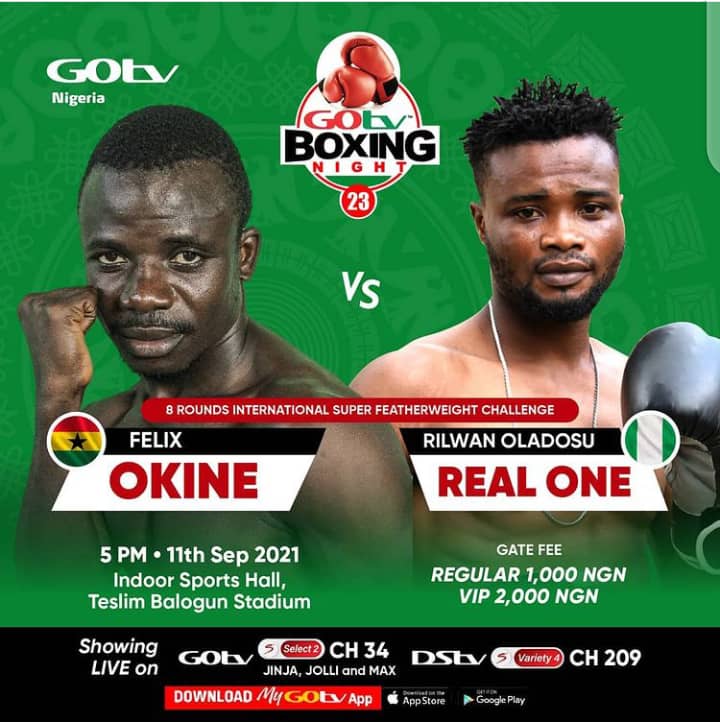 WBF International lightweight champion, Rilwan “Real One” Oladosu, has vowed that his next opponent, Ghana’s Felix Okine, will be severely punished when they clash at GOtv Boxing Night 23 on September 11.

The international super featherweight challenge bout between the two boxers is one of the major fights lined up for the event, which will be held at the Molade Okoya Indoor Sports Hall of the Teslim Balogun Stadium, Lagos.

Real One, who won the WBF title at GOtv Boxing Night 22, boasted that his clash with the Ghanaian will be a procession.

“I’m familiar with Okine and Ghanaian boxers, many of whom I’ve defeated. He will be seriously punished. The bout is made more important to me because of the rivalry between Nigeria and Ghana. I will make Nigeria proud,” he said.

His namesake and fellow WBF champion, Rilwan “Baby Face” Babatunde will also be in action. The WBF (Intercontinental) welterweight champion will seek redemption after his first professional loss in the Ukraine. He is scheduled to face Republic of Benin’s Naimou Aziz Samson in an international welterweight challenge duel.

Another major bout on the night will be the national light welterweight title defence between Taiwo “Joy Boy” Olowu, reigning champion; and the ambitious Isaac “I-Star” Chukwudi.

The event will also give fans the opportunity of watching former national lightweight champion, Nurudeen “Prince” Fatai, who is billed to fight Rilwan “Show Boy” Lawal in a featherweight duel. Light heavyweight star, Segun “Success” Olanrewaju will test his mettle against Fatai “Hit Man” Balogun, while Abiodun “Infiniti” Afinni will duel with Michael “Emirate” Godwin in the cruiserweight category.