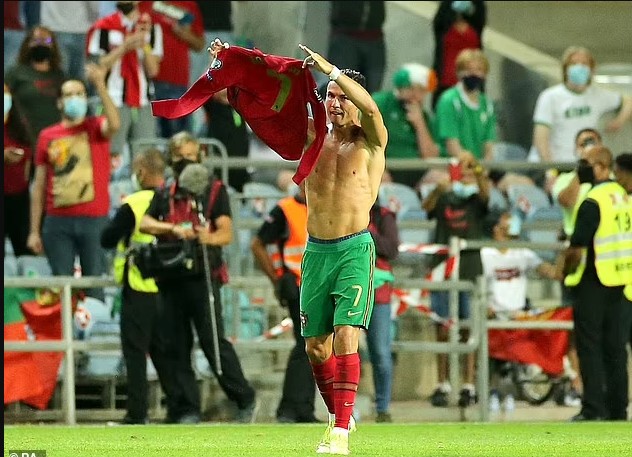 Cristiano Ronaldo could make his return to Manchester United even sooner than expected after he was released from international duty by Portugal.

Ronaldo’s booking against Republic of Ireland on Wednesday night means he is suspended for Portugal’s next World Cup qualifier in Azerbaijan on Tuesday, so coach Fernando Santos has decided not to play his captain in Saturday’s friendly away to Qatar.

United’s £19.6million signing can now accelerate his move back to Manchester, although he will still need to have a work permit and visa in place before entering the UK.

Ronaldo was booked for ripping off his shirt after scoring the second of two late goals as Portugal came from behind to beat Ireland in Faro.

His equaliser in the 89th minute was his 110th for Portugal as he became the highest-scoring man in the history of international football. No 111 followed in the 96th minute to snatch victory for Santos’ side and break Irish hearts.

It appeared as though Portugal would take the 36-year-old to Qatar when they posted pictures of him working out in the gym on their official website on Thursday. However, they later released a statement confirming that he has been released.

It read: ‘Cristiano Ronaldo was discharged from the national team stage this Thursday.

‘The yellow card against Ireland, as the second in this qualifying round, requires him to serve an official penalty match, which will follow against Azerbaijan.

‘This morning, the captain of the national team was part of the group of players who performed recovery work at the hotel.

‘Fernando Santos also led a training session on a lawn next to the hotel unit used by the national team during his stay in the Algarve.’