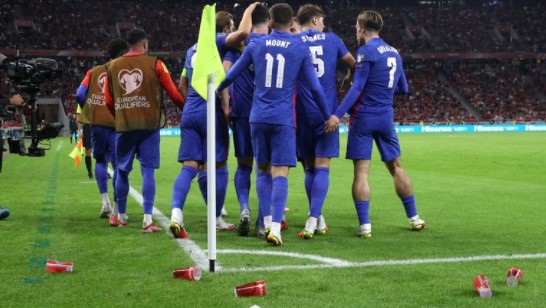 FIFA has announced it will open disciplinary proceedings after England players were racially abused during their 4-0 win over Hungary in Budapest.

The Football Association had called on the sport’s governing body to investigate chants that were aimed at Raheem Sterling and Jude Bellingham, and FIFA has now acted having heard from the match officials.

Reporting from inside the stadium in Budapest, Sky Sports News’ Rob Dorsett confirmed he had heard “sporadic monkey chants” from various areas of the crowd, directed primarily towards Sterling when he touched the ball – and including when he set up Harry Kane for the second goal.

Kick It Out chief executive Tony Burnett said the abuse was “preventable and predictable” and criticised FIFA and UEFA over the failure to ensure that a stadium ban issued by UEFA in July carried over into the World Cup qualifiers.

The Professional Footballers’ Association also condemned the abuse and urged FIFA and UEFA to close the regulatory “loophole”.

“Following analysis of the match reports, FIFA has opened disciplinary proceedings concerning the incidents last night at the game Hungary-England,” a statement read.

“Once again, FIFA would like to state that our position remains firm and resolute in rejecting any form of racism and violence as well as any other form of discrimination or abuse. We have a very clear zero tolerance stance against such abhorrent behaviours in football.”

Speaking to Sky Sports News in Budapest, England manager Gareth Southgate said: “We weren’t conscious of it on the side. I don’t know if the players on the pitch were. But everyone knows what we’ve spoken about for two or three years.

“They know what we stand for as a team and we have to hope we can continue to eradicate racism not only in football but from life in general.”

The England players had been loudly heckled at kick-off when they took a knee.

The squad had discussed the issue in the build-up to the game, and were made aware of the fact that the Republic of Ireland players were loudly booed in June when they took a knee before their friendly with Hungary in the nearby Szusza Ferenc Stadion.

Loud boos and jeers were clearly audible as England’s players made the gesture, which draws attention to the fight against racial inequality in the game and society.

The England players were also pelted with cups thrown from the crowd after Sterling had opened the scoring in Budapest.

A flare was then thrown onto the pitch following Harry Maguire’s goal to put the Three Lions 3-0 ahead.

England’s players were booed earlier this summer by some of their own supporters when they took a knee for their Euro 2020 warm-up games and again by small sections of the crowd in their Euro 2020 opener against Croatia.

Players taking a knee have also been booed at some club matches since the domestic season started.