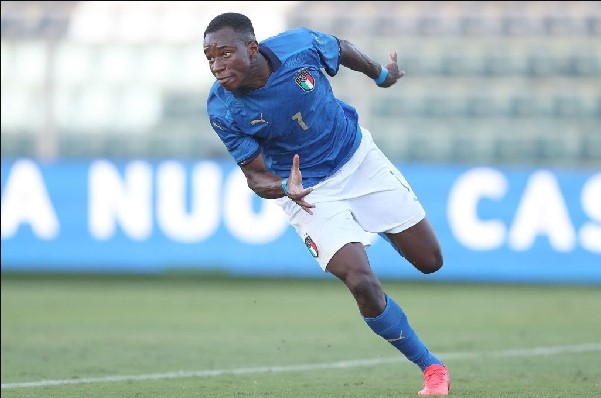 Highly-rated striker Kelvin Yeboah made an impressive debut as Italy U21 started their journey towards the European U21 Championship with a 3-0 win over Luxembourg on Friday.

Yeboah was introduced to the game at halftime and he enjoyed over 45 minutes of action on his debut appearance.

It was on the same day that Ghana, Yeboah’s native country, began their 2022 FIFA World Cup qualifiers with a 1-0 win over Ethiopia.

Yeboah, the nephew of Black Stars legend Anthony Yeboah, was invited by coach Charles Akonnor to help the team book a spot in Qatar but rejected the call-up.

A week after Akonnor handed Yeboah a debut call-up, Italy U21 Paolo Nicolato named his squad for the qualifiers and surprisingly Yeboah’s name was included.

Yeboah quickly updated his Instagram story, celebrating his invitation to play for Italy. It was clear by that move that Yeboah favoured playing for Italy ahead of Ghana where he was born.

Before his debut for the Azzurrini, Yeboah expressed his affinity for the Italians by revealing his connection to the European country while craftily refusing to talk about Ghana in his first statement since his call up.

“I came to Italy in 2004 when I was 4-5 years old, I got my passport for quite a while,” said Yeboah, who was born in the Ghanaian capital of Accra to Ghanaian parents before they migrated to Italy.

“In terms of football, I played in Monza, Novara, then I went to Gozzano and then to West Ham. , finally in Austria in Tirol Innsbruck and now in Sturm Graz where I am playing the Europa League.

“As a boy, I was very small and thin, I didn’t have much luck at the beginning and I decided to go to London. I grew up there, I learned other styles of play that have helped me in my career.

He added: “In Italy, there is a lot of tactics. and as a child I was not very good tactically, in London they leave you more freedom to play and carry the ball, play one-on-one and have single matches on the pitch,” Kelvin Yeboah said when he was asked about his upbringing in his football career.

“I felt much better there, I have learned to manage my body better and to take advantage of my speed. In Austria, we do a little more tactics but moving from Italy to England helped me a lot.”

Yeboah has been in terrific form this season in the Austrian top-flight with four goals and one assist after six games.