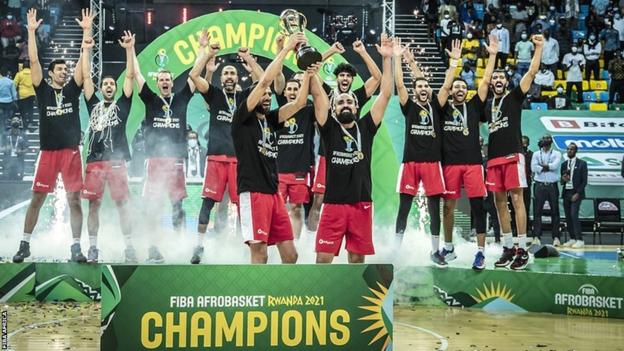 The Eagles of Carthage successfully defended the title they won at home four years ago going 6-0 during the tournament.

It’s the third time Tunisia have claimed this continental tournament after lifting the cup in 2011 and 2017.

Tunisia started strong and were seven points ahead at the end of the first quarter, stretching that to 47-34 by half time, but the Cote d’Ivoire rallied in the third quarter and made a game of it, the final few seconds were a cliffhanger with the Ivorians a single three pointer from overtime.

But the experienced Tunisian who had six players from the 2017 title-winning team in Kigali managed to hold off the late charge from the Elephants to be crowned Kings of Africa for a third time.

A tight unit, the Eagles dominated the glass and defended fiercely in the paint, keeping 2.08m centre and Cote d’Ivoire star Matt Costello to 0 points at halftime and 9 by the end of the game.

Up until the final Costello had averaged 17.6 points, 9.4 rebounds and 2.2 block shots per game.

Souleyman Diabate suddenly caught fire for the Cote d’Ivoire in the second half, scoring 20 points, and taking his team to within a single score from tying the game.

It was a classic Tunisian team performance where everybody did their job, they don’t rely on one star, rather on a collective effort.

The defending champs delivered on Africa’s biggest basketball stage, living up to their favourite tag.

Defeats to Brazil and Croatia at the FIBA Olympic Qualifying Tournament (OQT) in Split in June/July meant we didn’t see them in Tokyo, and they were hungry to assert themselves in Africa once more.

A statement 82-46 win over Guinea announced their intentions in Group B’s opener, but had to turn around a 19-point deficit against Egypt and find a way to win against a motivated Cape Verde team.

Like all great teams, they find a way to win.

Tunisia haven’t lost an official game in Africa since December 2018 when Egypt and Angola got the better of them.

They’re now on a 12-0 winning streak – six wins in the AfroBasket Qualifiers and six more in Kigali including the final.