Novak Djokovic's sad confession about wife in US Open interview 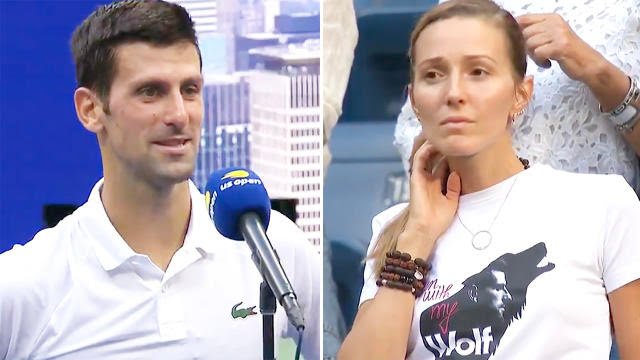 Novak Djokovic has opened up about the support of wife Jelena at the US Open, admitting she doesn’t always enjoying everything that comes with being married to him.

Jelena was spotted wearing a t-shirt featuring Djokovic’s face inside a silhouette of a wolf on Saturday, along with the words “I run with the wolf”.

When asked about the t-shirt in his on-court interview after defeating Kei Nishikori, Djokovic opened up about what the support of his wife means to him.

“She runs with the wolf,” he said.

“It can be very stressful to run with the wolf. I know that she doesn’t enjoy it at all times.

“It’s kind of living on the edge with the wolf. But I love her, she’s my great support.”

Speaking last year, Jelena opened up about the dark side of living life in the limelight and why she’s stepped out of the public eye in recent times.

“At first, the experience does not alarm you because it can bring you some difficulties. We look at public figures and think that kind of publicity is okay,” she said.

“But as time goes on, you lack anonymity, you lack the privacy to be able to do whatever you like at any time, in any situation.

“I try to resist all these expectations to always be myself and for Novak to be able to be himself.”

Djokovic’s ‘wolf’ mentality emerged at Wimbledon earlier this year when he said he felt the animals are his “spiritual nature guides”.

“I really do because I’ve seen some wolves when I was a kid roaming the forests of the mountain where I grew up,” he said.

“And that encounter left me frightened and even more connected with wolves. There is a connection, I personally feel it.

“I carry that with me and that helps me find that energy when I need it.

“That dynamic energy sometimes turns into a roar or an outburst but most of the times it’s useful energy.”

Novak Djokovic lets emotions spill out at US Open

Djokovic let it all out during his third-round win over Nishikori, slapping his chest or sneering with a fist raised to celebrate success, pointing to his ear to ask the crowd for more noise.

This was the Djokovic everyone is so accustomed to seeing, winning on the grand slam stage as he always does in this magical season, but also animated and into it, encouraging the spectators to join him for the ride on his path toward tennis history.

Taking another step in his bid to complete the first calendar-year Grand Slam by a man in more than half a century, Djokovic moved into the round of 16 at Flushing Meadows for the 14th consecutive appearance, coming back to beat Nishikori 6-7 (4-7) 6-3 6-3 6-2.

“I don’t plan to have those kind of emotional moments on the court, whether good or bad. It just happens,” Djokovic said.

The World No.1 is now 24-0 in the sport’s four most important events this season, having won the Australian Open in February, the French Open in June and Wimbledon in July.

“I would not be honest fully if I told you I don’t think or I don’t believe or I don’t visualise that I can win every single grand slam that I play in,” Djokovic said.

“I’m not surprised when I win slams and big tournaments because that’s always a goal.”