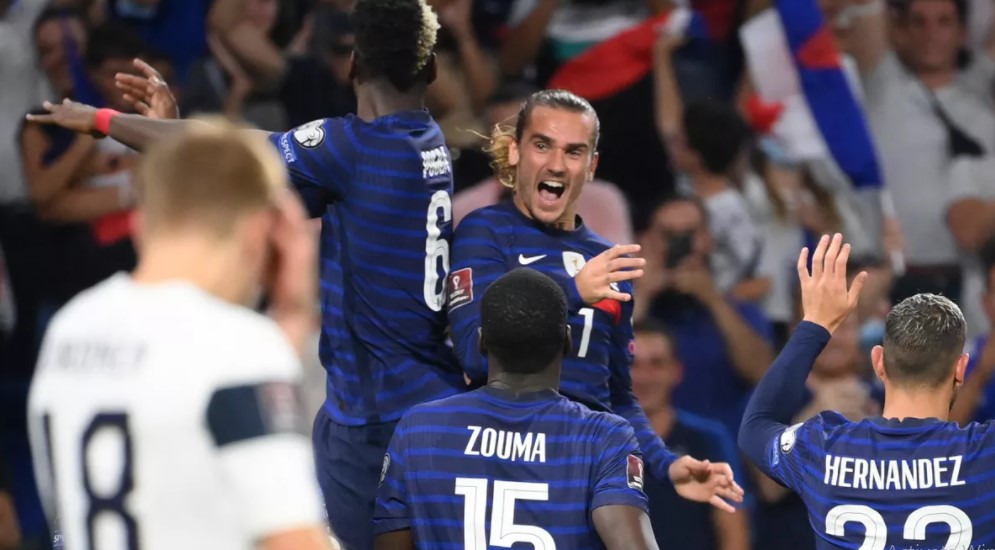 Antoine Griezmann was at the double as France brushed aside Finland at Parc Olympique Lyonnais to end a run of five games without victory and take control of Group D in World Cup qualification.

In the absence of the injured Kylian Mbappe, the Atletico Madrid star was back to his best after a poor run of form and opened the scoring in the 25th minute with a delightful first-time effort after intricate build-up play.

Griezmann grabbed his second of the game eight minutes after the restart with a finish from an improbable angle, and just minutes later he came agonisingly close to a hat-trick following a majestic passage of one-touch passing.

Karim Benzema, making a return to his home city in the French colours, almost got the goal his excellent performance deserved late on but was denied by Finnish goalkeeper Lukas Hradecky

After back-to-back draws to Bosnia and Herzegovina and Ukraine in qualifying, Didier Deschamps moved to a back-three and the tactical change sparked a major improvement as Les Bleus eased to a comfortable victory.

Victory moves France seven points clear at the top of the group although they have played a game more than second-placed Ukraine and two more than Finland in third.

TALKING POINT – GRIEZMANN STARS AS DESCHAMPS SWITCHES IT UP

Didier Deschamps has received a fair amount of criticism during a five-game winless streak that included a penalty shootout defeat in the European Championships to Switzerland, but credit where its due, he made the necessary tactical readjustments and it worked a delight.

Setting up in a 3-4-1-2, Deschamps handed a debut to Theo Hernandez at left wing-back, but it was Griezmann who was the real difference-maker, banishing any suggestions he could not play with Benzema. In fact, the two formed an almost telepathic connection at times as they carved the Finland defence apart time and again.

The goals moved Griezmann level with Michel Michel Platini as the nation’s third-highest goalscorer on 41, and at the age of just 30, he is now just 10 strikes off Thierry Henry’s record of 51.

Operating behind Anthony Martial and Benzema, Griezmann ran the show from start to finish and the only surprise is how he didn’t end up with a hat-trick.

25′ – GOAL! France 1-0 Finland (Antoine Griezmann): What a fine strike from Griezmann! The build-up is delightful as France play a triangle of one-touch passing before the Atleti forward takes control, curling a first-time shot into the bottom corner with a delightful shot.
53′ – GOAL! France 2-0 Finland (Antoine Griezmann): Griezmann at the double! The Atleti star scores from an improbable angle after a lovely attacking move involving Benzema and Dubois.
60′ – What a goal that would have been! Majestic one-touch passing from France carves up another great opening for Griezmann but he can’t keep his shot down! We would have been talking about that for years had that gone in!
87′ – Chance! Benzema’s performance deserves a goal but once again he’s denied by Hradecky who does well to push his powerful shot wide of goal.