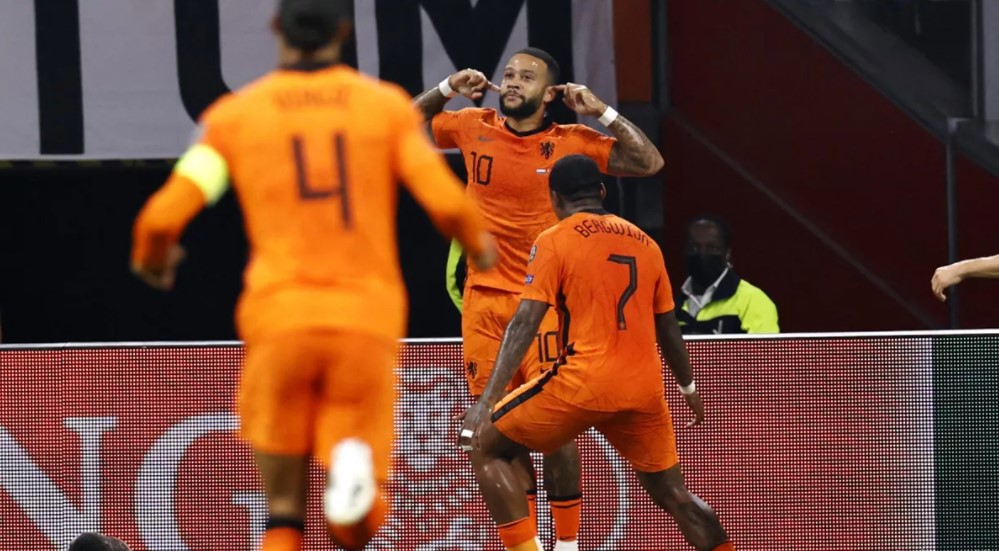 Turkey began the evening in first place, but were undone by some brilliant attacking play from the Dutch.

Davy Klaassen opened the scoring inside 60 seconds, stabbing home after opening Turkey up with a glorious flicked pass.

Klaassen went from scorer to provider on 16 minutes, as he exchanged passes with Memphis Depay who coolly slotted home.

Depay grabbed his second of the game on 38, scoring from the penalty spot after Klaassen had been felled in the box.

The Barcelona player completed his hat-trick with a close-range header on 54 minutes, while goals from Guus Til and Donyell Malen capped off the rout.

One concern for Netherlands and Liverpool was the sight of Virgil van Dijk going off late in the game following a heavy challenge in the build-up to Turkey’s consolation through Cengiz Under.

Turkey’s miserable night was compounded as Norwaybeat Gibraltar to move second in the table, level on points with Netherlands.

Erling Haaland capped a fine spell with the national side by helping himself to a hat-trick in the 5-1 win.

Denmark extended their perfect record in qualifying to six games with a 5-0 win over Israel.

The Danes’ win opened the door for Scotland and they moved second in Group F with a 1-0 win in Austria courtesy of Lyndon Dykes’ penalty on 30 minutes.

Croatia and Russia continue to set the pace in Group H, as they were winners over Slovenia and Malta respectively to move on to 13 points from nine games.

Slovakia beat Cyprus 2-0 to remain within four points of the top two.

Republic of Irelandscored late on through an own goal from Nikola Milenkovic, but it was only good enough for a 1-1 draw at home to Serbiaand they remain well off the pace behind Portugal in Group A.