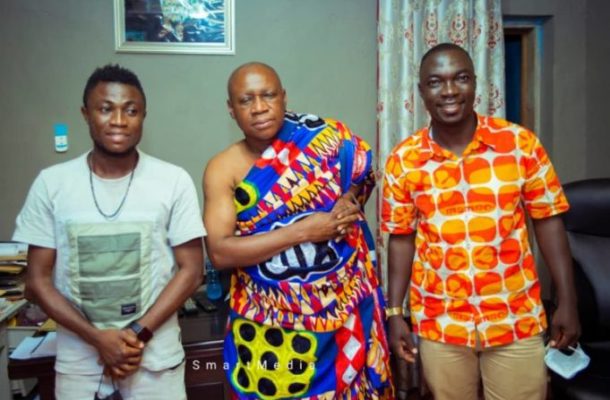 Asante Kotoko deputy captain, Emmanuel Gyamfi has been rewarded a land by Goasomanhene Nana Kwasi Bosompra I for uplifting the image of the Ahafo Region with his impressive performances in the Ghanaian top-flight for the Reds.

Gyamfi, who hails from Mim near Goaso, visited the chief, Nana Kwasi Bosompra I, on Monday, September 6, 2021, to present a customised Asante Kotoko Jersey to him.

Expressing his appreciation after the presentation, the Omanhene of the Ahafo regional capital gave the plot of land to Gyamfi – who once played for Goaso-based Unity FC before joining Wa All Stars (presently Legon Cities FC).

He wished Gyamfi the best of luck ahead of the upcoming 2021/22 football season which is slated to kick off October 29.

“Gyamfi hails from Ahafo and he has taken us far. I will urge him to do more than he did last season for Asante Kotoko. It’s our prayer that he gets an injury-free season to be able to perform more than last season. I know he’ll not disgrace, ” the Omanhene said.

“He has to build here. So, I have given him a plot of land to build his dreamland on it. I will urge him to start building now with the little he gets” Nana Bosomrah added.

”We’re doing this to encourage all people from this area to perform well in every profession they find themselves in,” he concluded.

Ghandi was accompanied to the Chief’s palace by sports journalist, Yaw Adjei.

Gyamfi is one of the longest-serving players in the Porcupine Warriors team having joined in 2016 from Wa All Stars after a short stint with an Armenian side.