On a roll: Leylah Fernandez stuns Elina Svitolina, advances to US Open semifinals 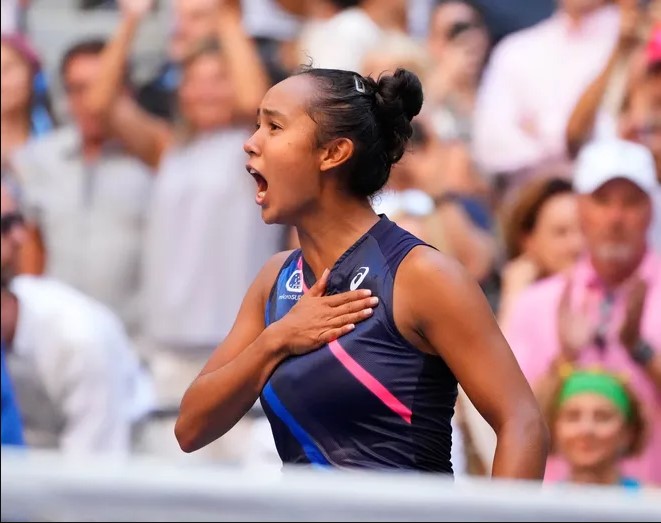 This magical run of Leylah Annie Fernandez keeps going, and with the level of tennis she has produced in three consecutive upsets of top-20 players, it might just carry her to the U.S. Open title.

Fernandez, the Canadian lefty who turned 19 on Monday, put together another stunning third-set performance at Arthur Ashe Stadium on Tuesday to knock out No. 5 seed Elina Svitolina, 6-3, 3-6, 7-6 after 2 hours and 24 grueling minutes, and advance to the semifinals of a Grand Slam for the first time.

“For today and this match, I was only thinking of trusting myself, trusting my game,” Fernandez said. “After every point, win or lose, I would always tell myself ‘trust my game, go for my shots, just see where the ball goes.’ “

It went in – a lot, just as it has this entire tournament against a series of far more established champions.

After pulling off an upset of two-time U.S. Open champion Naomi Osaka last Friday that put her on the map, Fernandez has used her speed, her serve and her devastating forehand to back it up with wins over former Grand Slam champion Angelique Kerber and now Svitolina, who won the bronze medal at the Tokyo Olympics last month.

Given her inexperience in big matches, logic would suggest Fernandez would at some point crash back to earth under pressure. Instead, she has consistently played her boldest, most fearless tennis when it matters most to come up with flashy winners – and it was the far more experienced Svitolina who played more conservative, nervous tennis in the most important moments.

Only when Fernandez served for the match at 5-3 did she blink, tossing Svitolina a lifeline with a double fault and unforced error that helped her get the match back on even terms with a break.

From there, every point was tense – and it showed, particularly in Svitolina’s racquet head speed, which slowed down considerably as she started guiding the ball early in the tiebreaker and making a series of errors that allowed Fernandez to get out to a 4-1 lead.

Svitolina’s serve helped her fight back, getting the tiebreak to 5-5. It was the next point that proved to be decisive. After a short ball that drew Svitolina into the net, Fernandez had to race to the forehand corner to retrieve a volley that wasn’t quite sharp enough to get past her.

Though it wasn’t an easy shot, Fernandez was able to sweep down the line where it kissed the top of the net and past Svitolina, who had little chance to make a play on the ball.

At 6-5, Fernandez’s first serve found Svitolina’s backhand, which sailed long as Fernandez fell to her knees in disbelief.

“In the tiebreaker, I just thought that if I’m tired, then she must be tired, too, because we’ve both been working so hard and I’ve been making her move so much, so I have no idea how she’s getting to all these balls,” Fernandez said. “I just trusted myself and I trusted in my game and in my fitness that I’ve worked so hard the past few years that I can pass through the finish line.”

There wasn’t much in Fernandez’s 2021 season to suggest this kind of deep Grand Slam run was coming. Though she did win her maiden WTA title in Monterrey, Mexico, in March, her record against top-50 players this year was just 3-7 and she hadn’t advanced past the second round of the main draw in any of her last 11 tournaments.

But at the U.S. Open, she has found a completely different level of tennis. Against Svitolina, she hit 42 winners and won 19 of 24 points when she came to the net and has found an unusual level of comfort playing on the big stage.