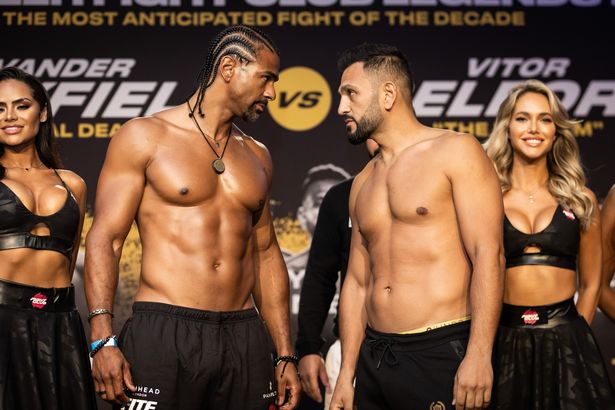 David Haye weighed in over a stone heavier than his opponent Joe Fournier ahead of their heavyweight fight this weekend in Florida.

Haye and Fournier will meet on the undercard of Evander Holyfield vs Vitor Belfort on Saturday night.

The fight – which will take place over eight rounds – has been sanctioned as a professional bout by the Florida commission and will go on both fighters’ records.

Haye is 28-4 as a professional and retired from boxing following his 2018 loss to Tony Bellew.

The former unified cruiserweight world champion Haye stepped on the scale at 211.5lb for his clash with Fournier who came in 16 pounds lighter at 195.5lb.

And Haye recently spoke with Mirror Fighting about how Fournier has no chance of beating him.

He said: “He truly believes in his heart that he can beat me. It’s quite funny, I find it amusing.

“I’m not envisioning any version of this fight which ends with me losing. He believes if my Achilles snaps mid-fight then I won’t be fighting for another five rounds.

“He has a strategy for a one-legged fighter but even if it does snap I still think… even with two snapped Achilles I’d find a way to beat him.”

Haye said he will receive a massive £4m purse for fighting Fournier, which is more than he was paid for his first fight with Bellew.

Fournier is 9-0 inside the ring with all his wins coming by stoppage, but none being against any notable opponents.

The businessman turned boxer is close friends with Haye and the fight came around over an alcohol-infused meal in Mykonos.