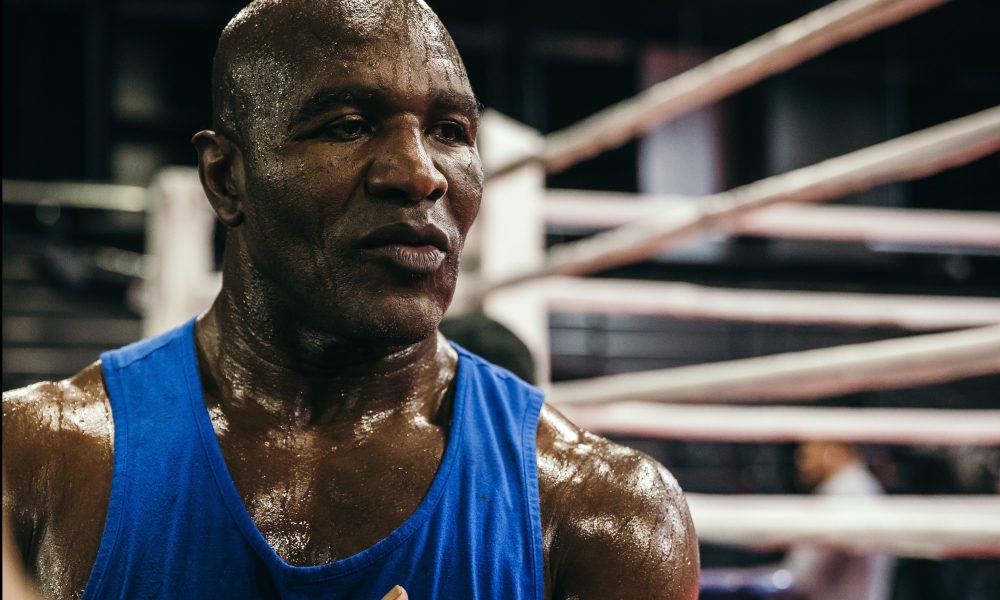 When I watched the recent video of Evander Holyfield in training, I thought of film of Muhammad Ali training for his ill-fated fight against Larry Holmes in 1980.

In retrospect, we can see that Ali’s slow, awkward movement should’ve been a red flag. He had deteriorated by the age of 38 to a point where he had no business in the ring with an elite, young heavyweight like Holmes.

Holyfield, 58, doesn’t look much better than Ali in his short training video. His punches seem to have some pop when they land but he looks sluggish. His body doesn’t seem as willing – or able — as it once was to follow instructions from his brain.

In other words, he looks his age.

A part of me thinks it’s nothing to worry about as he prepares to face 44-year-old Vitor Belfort on pay-per-view Saturday in Hollywood, Florida. I’m thinking, “He’s just going through the motions for the camera. He looks fit. He knows what he’s doing, even as he approaches his 59th birthday next month.”

My immediate thought when I heard last week that Holyfield would replace COVID-stricken Oscar De La Hoya as Belfort’s opponent in the eight-round fight was that this is a terrible matchup. Evander Holyfield could beat a former MMA champion with almost no boxing experience at 68.

I still believe that. I think Holyfield’s muscle memory alone will be enough to take down Belfort.

At the same time, my mind keeps going back to the hard-to-watch film of Ali and the beating he took from Holmes, who won by knockout after 10 rounds. Those close to Ali and boxing officials should never have let it happen. I’ll always wonder how much that fight and his career finale against Trevor Berbick contributed to his subsequent health issues.

Should the video of Holyfield also be a red flag?

Mike Tyson, Holyfield’s old rival, looked ferocious hitting the mitts in workout videos before his exhibition against Roy Jones Jr. last November. Ferocious is the last word I’d use to describe what we saw from Holyfield, who last fought in 2011.

“The Real Deal” looked good against 45-year-old Brian Nielsen in that fight, winning by a 10th-round stoppage. That was Nielsen, though. And Holyfield was 48, not 58 and coming off a decade-long layoff. This is largely uncharted territory, although a few boxers have fought at around the same age.

I still believe Holyfield will be fine. The fact he’s fighting a boxing novice who also is no youngster should be enough to keep him safe. Plus, the full-fledged heavyweight should have a significant size advantage. Belfort was preparing to fight De La Hoya at a weight limit of 185 pounds, meaning he’ll probably come in around 200.

And I wouldn’t be surprised to hear one day Holyfield and Belfort made a back-room deal – or perhaps shared a wink – to hold back once they’re face to face in the ring. That’s why I think the fight might go the eight-round distance.

I could be wrong, though. And that’s scary.

Remember: The fight was moved by Triller Fight Club from Los Angeles to Florida because the California State Athletic Commission refused to sanction it, which says something about the potential danger Holyfield faces.

Holyfield might not be able to handle the speed and reflexes of a man 14 years his junior, even one with crude boxing skills. He might look something like Ali did against Holmes. And that might have a deleterious effect on his long term health, at least to some degree.

The last thing we want to see is a boxing legend — a four-time heavyweight champion — who is almost 60 take a beating. If he does, we might look back at his training video as one foreboding sign and think, “We should never have let it happen.”