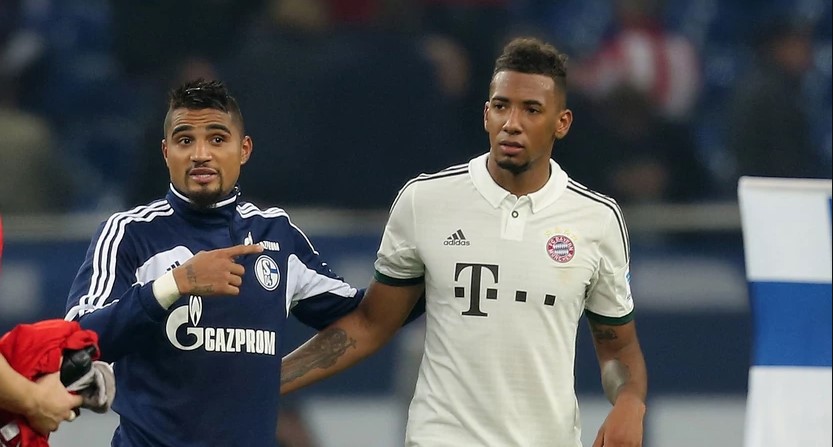 KEVIN-Prince Boateng has refused to defend his brother Jerome after the former Bayern Munich defender was convicted of assault.

The 33-year-old German was handed a £1.5 million fine after a court heard how he bit his ex-girlfriend on the head and spat blood in her face during a holiday in the Caribbean in 2018.

And now his brother Kevin, who currently plays for Hertha Berlin, says he simply won’t defend Jerome’s actions and will cut all ties.

Speaking with German outlet BILD he said: “I’ve already distanced myself from Jérôme for a long time. I appreciate and respect German law.

“I despise violence against women. I don’t identify with the actions of my brother and therefore I have nothing to do with him anymore.”

The former Ghana international, once of Barcelona and Tottenham made the statement after Jerome appeared in court in Munich earlier this week – accompanied by his lawyer.

There a hearing was told how Jermone also punched his ex-partner so hard in the kidney that she could not breathe during the same assault.

“He grabbed my eye with his thumb. He tore my hair, then bit me in the head,” Sherin told a court in Munich yesterday.

“He opened his lip, pulled my head back and spat blood on my face.”

Boateng had earlier denied all the allegations made against him as he testified for almost two hours on Thursday.

The footballer claimed he was attacked, telling the court that Sherin become aggressive and hit him – and when he tried to push her away she fell.

Boateng was convicted of causing dangerous bodily harm and insulting her in an incident in 2018 while they were on holiday in the Turks and Caicos Islands in the Caribbean.

He was then handed a massive fine, the highest possible financial damages that could be imposed by the Munich District Court.

After judge Kai Dingerdissen gave his verdict, Boateng left the courtroom surrounded by bodyguards and drove off in a black SUV.

According to German newspaper Bild, the argument had begun over a “card game” when one of her friends accused Boateng of cheating during the game.

When Sherin was asked why she only filed a complaint three months after the assault, she said their relationship was “toxic, very turbulent.”

She went on to allege that she was assaulted almost every day and that she had to stand up for herself or “otherwise he would never have stopped”.

Boateng, who now plays in France for Lyon, and Sherin are also locked in a separate ongoing legal battle of the custody of their twin girls.

The footballer and his ex-partner were together for 10 years and began dating in 2007.

The pair broke up one year after their daughters were born but rekindled their romance in 2014 and the following year they got engaged.

They then split again following the assault in 2018.

It has been a turbulent year so far for Boateng.

The footballer’s ex-girlfriend Kasia Lenhardt was found dead in her apartment having committed suicide in her Berlin flat in February.

Boateng was away playing for Bayern at the Club World Cup in Qatar at the time but was immediately given permission to fly home after the news of her death.

The week before she died Boateng announced he had split from the stunning 25-year-old model and mother of one after 15 months together.

Six days after the break-up, Kasia said in an interview she vowed to “speak up” and “fight back” once she recovered from the split.